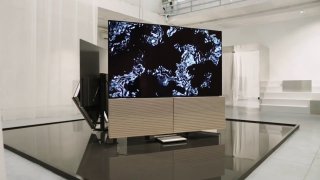 The luxury TV brand Bang & Olufsen is getting ready to sell a TV whose size, resolution and price are all unbelievably over the top.

Per a press release, Bang & Olufsen will release the Beovision Harmony 88-inch TV next month through its stores. It's the largest OLED TV to ever come to market, and also the first 8K TV of that size.

The product features a screen and a9 Gen 3 processor made by LG, although it has Bang & Olufsen branding. The 88-inch TV carries a $49,000 price tag, which is quite a bit more than even most higher-end TVs typically cost. That dollar amount would be quite a lot to pay for a car, let alone a television.

The Beovision Harmony line, TechRadar reported, first appeared at the Milan Design Week in mid-2019, and was also at CES in January. Smaller versions, measuring sixty-five and seventy-seven inches, had appeared on the market previously, but the big one is finally arriving next month.

“Bang & Olufsen has effectively taken an LG 8K 88-inch OLED ZX TV and optimized it for its own premium purposes,” the company said in its release. “As such, the Beovision Harmony is powered by the new α (Alpha) 9 Gen 3 AI Processor, which leverages upgraded processing power and artificial intelligence deep learning algorithms to deliver the highest possible image quality. It also enables a host of specialized features for various types of content to bring movies and sports to life like never before. And with 8K resolution, there’s up to four times more detail than the 4K UHD.”

Who needs a TV like that? That's a good question. As we’ve told you before, there’s virtually no reason to get an 8K TV now or anytime soon, since there’s no 8K programming available, from broadcast, streaming services or even physical media. And the up-conversion capability, from 4K to 8K, tends not to be worth the extra thousands of dollars.

“Of course, the question of who will buy it always looms large over a product such as this,” said one review of the seventy-seven-inch version. The answer, it would appear, is someone for whom money is not much of an object, who wishes to splurge on the biggest and most expensive TV they can.