Best Buy Is Making Serious Money Thanks to Coronavirus 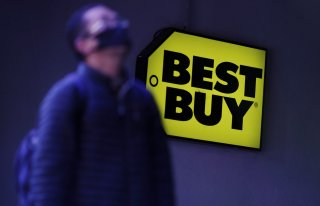 Best Buy announced its quarterly earnings Tuesday, posting revenue of $11.85 billion for the three months that ended in September, which was ahead of analyst expectations, per CNBC.

However, the company’s stock dropped Tuesday after Best Buy hinted at higher shipping costs and lower holiday sales. The company’s CFO said that, due to “uncertainty related to the various impacts of the pandemic,” Best Buy would not be issuing guidance.

“Today, we are once again reporting strong quarterly results in the midst of unprecedented times,”  Corie Barry, the CEO of Best Buy, said in the earnings release.

The Minnesota-based company, the nation’s largest brick-and-mortar consumer electronics retailer, posted a profit of $391 million in the quarter, compared with $293 million in the same quarter the year before.

“Our comparable sales grew a remarkable 23% as we leveraged our unique capabilities, including our supply chain expertise, flexible store operating model and ability to shift quickly to digital, to meet what is clearly elevated demand for products that help customers work, learn, cook, entertain and connect in their homes,” Barry added. “The current environment has underscored our purpose to enrich lives through technology, and the capabilities we are flexing and strengthening now will benefit us going forward as we execute our strategy.”

Barry went on to thank her team at Best Buy for “empathy, ingenuity and extraordinary execution,” throughout the quarter.

“From a profitability standpoint, our better-than-expected sales resulted in significant operating income rate expansion and earnings growth,” Barry said in the report. “This strong financial performance is allowing us to share our success with the community, our shareholders, and, importantly, our employees. We recently made a $40 million donation to the Best Buy Foundation to accelerate the progress towards our goal to reach 100 Teen Tech Centers across the U.S. In addition, we plan on resuming our share repurchase program during Q4 of this fiscal year.”

Best Buy had closed most of its stores to in-store service in the spring, due to the pandemic, while also offering curbside service. In June, the company began once again allowing customers to shop inside the store. At the same time, the company brought back hundreds of employees who had been furloughed at the start of the pandemic.