Soon, You Can Walk Into 800 Best Buy Stores and Shop (No Appointment Needed) 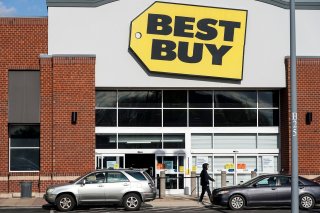 Best Buy, like most major retailers, has had to go through major changes due to the coronavirus pandemic.

At the end of that month, the company announced that, with safety precautions in place, it was resuming both home visits and some in-store consultations.

Now, Best Buy is getting ready to take a step closer to normalcy.

According to a blog post on the company's website, Best Buy on June 15 will allow shoppers inside the store at 800 of its locations, without the need for an appointment. The company will continue, however, to offer contactless curbside pickup and in-store consultations, for those more comfortable continuing to take precautions.

The stores will be limited to 25 percent capacity, the company said.

“Throughout the pandemic, nothing has been more important to us than the safety of our customers and employees,”  Ray Sliva, president of retail, said. “We’re now confident we can provide a safe experience for shoppers who want to visit our stores to browse, see tech products firsthand and get helpful advice from our Blue Shirts or Geek Squad Agents.

As for additional precautions, Best Buy will require mandatory self-health assessments, including temperature checks, for all employees at the start of their shifts, special shopping hours for elderly and vulnerable customers, and acrylic shields at its checkout counters.

In quarterly earnings announced last month, Best Buy said that its first-quarter net income dropped to  $159 million, from $265 million at the same time the year before. While in-store sales were way down, online sales increased.

“The strong sales retention is a testament to the strength of our multi-channel capabilities and the strategic investments we have been making over the past several years,” CEO Corie Barry said in the earnings release.