Can Your Apple Watch Help to Detect Coronavirus? 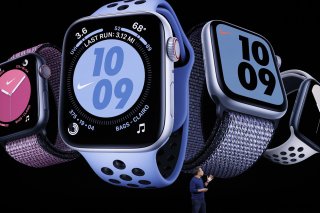 There have been numerous stories over the last few years about Apple Watch users whose accessory has literally saved their life. In some cases, the Apple Watch has detected an irregular heartbeat or called 911 after its owner either got into an accident or fainted.

Apple has also touted the Apple Watch’s life-saving capabilities, whether in saving people in emergencies, or alerting people to heart problems and encouraging them to see a doctor, who has later diagnosed them with a condition.

“I get so many [emails] each week from people that found out they have a heart problem from their watch,” Apple CEO Tim Cook said in an interview with Bloomberg News in 2018. “It’s alerting you if you’ve been sitting and your heart has climbed to a level that doesn’t make sense relative to the activity that you’re doing.” The Apple Watch was one of the first new product categories introduced by Apple after Cook over as CEO in 2011.

Now, there’s talk that Apple Watch may have the possibility to help in detecting coronavirus.

“Subtle changes in an individual’s heartbeat, which can be measured on an Apple Watch, are able to signal the onset of COVID-19 up to seven days before individuals are diagnosed with the infection,” Mount Sinai Health said. “That preliminary observation was made by researchers at the Icahn School of Medicine at Mount Sinai in a new preprint from the Warrior Watch Study, which was recently uploaded to the medRxiv server.”

The Warrior Watch Study is an existing study meant to measure the effect of the pandemic on hospital staff.

The Mount Sinai study was announced in early December, but got a great deal of media attention in recent days, including by CBS News, which also cited a separate study by Stanford University.

The Stanford study included trackers from Garmin and Fitbit, in addition to the Apple Watch.

Stanford found that “81% of coronavirus-positive participants experienced changes in their resting heart rates up to nine and a half days prior to the onset of symptoms. An extremely elevated heart rate was indicative of symptom onset.”

Another wearable product, the Oura ring, was used during the NBA’s bubble last fall, to help detect coronavirus symptoms among basketball players in Orlando. The NBA got through the months-long bubble period without any positive tests, although it’s unclear how much the Oura ring had to do with that.

While it appears from the studies that wearable products can be helpful, they should not be used as a substitute for standard coronavirus precautions.