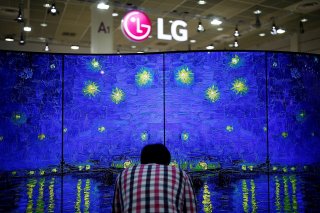 Despite the ongoing coronavirus pandemic across the country that has led to many workers being laid off and furloughed, Americans are still willing to shell out big bucks for large HDTVs.

Some individuals have even tapped into their $1,200 government stimulus checks or reallocated their vacation funds to make the hefty purchases.

According to the research firm The NPD Group, the average retail price for a 65-inch TV in the April-June period was $644, which is about $200 cheaper than the same time last year.

The firm added that sales of TVs 65 inches and larger rose 53% over the first half of 2020. Compared to a year ago, HDTVs bigger than 65 inches saw a mammoth jump of 77% in the April-June period.

“Obviously the numbers have accelerated as the pandemic has kept many people in their homes,” Stephen Baker, The NPD Group’s vice president of industry analysis, told USA Today.

“During the pandemic, TVs have served as a refuge for people, as we have seen double-digit increases in soundbars, streaming players and mounts.”

Samsung, the world’s biggest TV manufacturer since 2006, noted that its HDTVs larger than 75 inches are now more popular than ever, and the company’s Korean archrival LG has enjoyed double-digit growth in high-end HDTVs that are priced at least $1,000.

According to the Consumer Technology Association (CTA), sales of premium TV sets, including those with 4K Ultra High Definition, will surpass sales of 2019.

“And the more time we spend at home, the more time we are exposed to this plethora of amazing content streaming and otherwise, people are going to want the biggest, best experience in their living room they can get.”

The rising consumer spending on TVs, however, may not totally offset a likely down year in overall sales. The CTA anticipates that TV makers will ship thirty-nine million sets in 2020, a 6% drop from 2019. Moreover, the projected TV sales revenue of $21 billion will be a 14% decline.

For the year, the trade association also sees a 2.2% fall in sales of general tech products, which include smartphones, wireless earbuds, gaming consoles and streaming services.