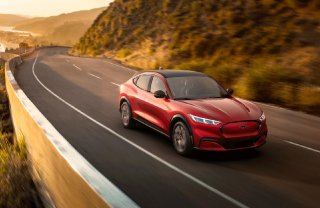 The prototype vehicle—called Mustang Mach-E 1400—boasts seven electric motors (five more than the Mustang Mach-E GT), a 56.8-kilowatt-hour battery and high downforce that is fully ready for the racetrack. It will be used to show off the potential performance of all-electric vehicles, as dealerships start selling the new crossover later this year.

“The challenge was controlling the extreme levels of power provided by the seven motors,” Mark Rushbrook, motorsports director of Ford Performance, said in a news release.

“Mustang Mach-E 1400 is a showcase of the art of the possible with an electric vehicle.”

Ford has committed to investing more than $11.5 billion in electric vehicles worldwide, including the Mustang Mach-E, through the year 2022.

“Now is the perfect time to leverage electric technology, learn from it, and apply it to our lineup,” Ron Heiser, chief program engineer for the Mustang Mach-E, said in a release.

“Mustang Mach-E is going to be fun to drive, just like every other Mustang before it, but Mustang Mach-E 1400 is completely insane, thanks to the efforts of Ford Performance and RTR.”

Vaughn Gittin Jr., founder of RTR Vehicles, also had high praises for the Mach-E 1400, which is expected to make an appearance at an upcoming NASCAR race.

“Getting behind the wheel of this car has completely changed my perspective on what power and torque can be,” Gittin Jr. said in a release.

“This experience is like nothing you’ve ever imagined, except for maybe a magnetic roller coaster.”

Ford stated that the power and configurations available on the Mustang Mach-E 1400 will offer plenty of opportunities for experimentation.

“The chassis and powertrain are set up to allow the team to investigate different layouts and their effects on energy consumption and performance, including rear-wheel drive, all-wheel drive and front-wheel drive,” Ford said in a release.

“Drift and track setups have completely different front-end configurations like control arms and steering changes to allow for extreme steering angles in drifting. Power delivery can be split evenly between front and rear, or completely to one or the other. Downforce is targeted at more than 2,300 lb. at 160 mph.”

Ethen Kim Lieser is a Minneapolis-based Science and Tech Editor who has held posts at Google, The Korea Herald, Lincoln Journal