iPhone 13 Update: Everything We Know Right Now (And One Problem) 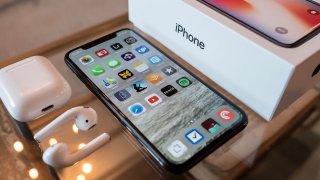 Apple is expected, as it does every year, to unveil a new line of iPhone models in the fall. While last year’s models arrived later than usual, mostly due to pandemic-related supply chain delays, there are no indications of similar troubles this year.

As usual, not much is known for certain about this year’s iPhones, and we probably won’t know for sure until Apple officially unveils the new device, probably this fall. Apple will hold its annual World Wide Developers Conference starting on June 7, but that event is typically focused on software, rather than hardware, so we’ll get a look at the new version of iOS that will ship on the next new line of iPhones.

Indications are that there will once again be four models, at the same sizes as the four iPhones that arrived in late 2020. A Tom’s Guide report last month found that the two Pro models would  offer a 120Hz LTPO display, with the other two models featuring a LiDAR sensor. There were also reports that production was ahead of schedule on the latest lineup.

BGR, citing multiple stories from Digitimes, said that Apple’s suppliers have already begun mass-producing the A15 processor, which will power the next line of iPhones. Another Digitimes report said that Apple would likely become the top purchaser of OLED screens, exceeding that of Samsung. Starting in 2020, Apple went entirely to OLED screens for its iPhones, and that’s expected to still be the case for this year’s models.

“The report notes that some supply chain makers claim to have received payments from a US-based client, which could be Apple. The report does note that it’s too early to tell whether the iPhone 13 will launch on time or if it might see delays similar to last year. The report says that if everything goes smoothly, production could peak in September and October,” BGR said.

CNET, noting that Apple is now roughly halfway between the arrival of last year’s iPhone and this year’s, ran through some rumors of what could be on store for the next iPhone model. These could include a pink model, to go along with the purple iPhone that was recently introduced and has been a heavy part of Apple’s TV advertising of late. However, the pink model appears to have originated with a fan render.

There are also rumors that the line might have a name other than “iPhone 13,”and that there might be a lower price point than last year’s line.

In terms of how the next iPhones will look, most rumors suggest that it won’t be a massive change from last year’s models. There have been rumors that the phone’s notch will either be smaller or shallower, or that the Lightning port could go away, although that’s probably less likely.