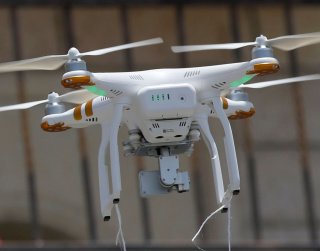 It’s been quite a summer for unusual stories involving drones in the Minneapolis area.

In late May, during the opening days of the protests in Minneapolis following the killing of George Floyd, a Predator drone was spotted flying overheard in that city. The drone was under the auspices of U.S. Customs and Border Protection (CBP), which told the media that the drone was “preparing to provide live video to aid in situational awareness at the request of our federal law enforcement partners in Minneapolis.” The U.S. House Oversight Committee later requested documents from the Department of Homeland Security, about those drones.

In July, WCCO reported that police in Golden Valley, a suburb of Minneapolis, had used an overhead drone in an attempt to catch nude sunbathers at an area lake. Some caught in the beach reconnaissance alleged that it was carried out in a way that implied racial discrimination.

And then, Tuesday, a drone was spotted somewhere else in Minneapolis: At a baseball game.

Tuesday afternoon’s day game between the Minnesota Twins and Pittsburgh Pirates at Target Field in downtown Minneapolis was delayed by about five minutes when a drone was spotted overhead, per a video from Fox Sports North’s broadcast of the game. It was, according to SB Nation, the first time in baseball history that an MLB game has been delayed for that reason.

The drone appeared in the fifth inning of the game, at which point umpires made it clear that the flying object was not welcomed, and players were taken off the field for safety reasons. One reporter, Dan Hayes of The Athletic, stated on Twitter that pitchers in the bullpen attempted to throw baseballs at the drone. After five minutes, the drone left the vicinity of the stadium and the game resumed. The Twins ended up winning 7-3.

It’s not clear yet who is responsible for flying the drone or what their purpose was for flying it in the ballpark. Police are investigating the incident.

“That was really crazy. I’ve never seen that before,” Twins pitcher Jose Berrios, who was on the mound when the drone appeared, told the Minneapolis Star Tribune. “In my mind, I said, ‘Really? That has to happen right now when I’m pitching?’ I just tried to keep focused.”

A Twins executive added that under FAA rules, the stadium is considered restricted airspace, and that when Target Field hosted the All-Star Game in 2014, Department of Homeland Security conducted a test of new drone-detection equipment, and caught one drone.