Many Moviegoers are Willing to Come Back, Survey Says 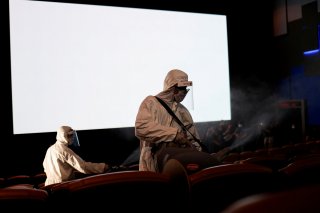 Few industries have been as decimated by the coronavirus pandemic as that of movie exhibition. Theaters were closed in the United States for months, and while some theaters have since reopened, customers are mostly staying away from them, and movie studios are as well. Most major releases have been postponed until 2021. Meanwhile, the major movie theater chains find themselves in dire financial straits, and some movie theaters have announced that they are closing permanently.

However, with news of a pair of promising vaccines, it appears regular moviegoing may resume sometime soon. How do moviegoers feel about going to theaters in the age of coronavirus?

The movie ticketing website Atom Tickets, in a survey taken the first week of November—prior to the vaccine news—asked customers how they feel about going back.

Among those who live in markets where theaters are open and have been back to theaters since they reopened, 95 percent are “very likely/likely to return,” while 92 percent would recommend going back to the movies to others.

Also, on every major standard of coronavirus mitigation measures taken by theaters—“cleanliness of the theater,” “compliance with mask regulations,” “socially distant seating,” “socially distant lines at the box office/concession” and “concessions preparation and handling safety”—more than 50 percent of those asked answered “excellent” to all five.

In addition, 76 percent of those who have been back-ordered concessions.

As for those who haven’t been back to theaters, 41 percent said they were waiting for a coronavirus vaccine.

One caveat to the survey is that Atom Tickets is a movie ticketing website, with a vested interest in moviegoers getting back to theaters.

“We’re dedicated to helping theaters reopen by understanding the customer experience and by providing safe solutions for movie fans. Our latest survey results are a good indication that many movie fans are returning to the movies but also point out what it will take to get everyone back," Matthew Bakal, chairman and co-founder of Atom Tickets, said in the announcement. “We believe our new capabilities, like booking a Private Watch Party and ordering Contactless Concessions, will help movie fans feel even more comfortable and confident going to theaters.”

Because movie theaters are indoors and have many people gathered together in close quarters for hours at a time, there were have been many concerns since the start of the pandemic that attending them is unsafe. However, it doesn’t appear that there have been any instances of movie showings leading to any type of major spread of the virus since they reopened, and an expert from UC Davis, while still urging caution, said this summer that attending movies might be less risky than originally thought.