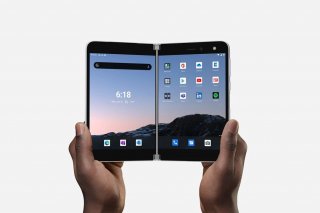 Microsoft on Thursday announced the arrival of the new version of its Surface Duo, a dual-screen Android phone that sports a pair of 5.6-inch OLED screens that combine into an 8.1-inch display, while selling for $1,399.

Preorders are open already, and the Surface Duo will ship on September 10. This latest Microsoft smart phone was first announced last fall.

“Today, as we look ahead to the next wave of mobile productivity and creativity, we see that same opportunity to create something new with Surface Duo – not to reinvent the phone, but to inspire people to rethink how they want to use the device in their pocket,” Panos Panay, Microsoft’s chief product officer for Windows + Devices, wrote in a blog post this week. “Available for preorder in the U.S. starting today, Surface Duo brings together the power of Microsoft 365 experiences and the full ecosystem of Android mobile apps into one device, with two screens that you can take anywhere.

The Surface Duo offers both Microsoft 365 and Android apps, and the two screens provide plenty of opportunities to multitask. It features an 11-megapixel f/2.0 camera and is powered by a Qualcomm Snapdragon 855.

The phone, however, does not support 5G.

Microsoft has also released a press briefing that it conducted on the device.

“We know we’re pushing boundaries, I’m not remotely confused about it,” Panay said in the briefing. “But we have this belief that we need to empower people to achieve more. This is what we talked about, this is the mission of the company, and it’s innate, it’s part of who we are right now at Microsoft.”

The Surface Duo represents Microsoft’s return to smartphones. In the very early smartphone era, Microsoft offered a mobile operating system called Windows Mobile, which in 2010 was rebranded as Windows Phone. This rebrand coincided with a Nokia partnership that was followed by Microsoft’s 2014 acquisition of Nokia’s device business, to try to challenge the then-primacy of iOS and Android. That effort never gained traction, however, with Microsoft ultimately pulling the plug and selling its Nokia elements in 2016.

In 2010, prior to the launch of Windows Mobile, Microsoft launched a bizarre smartphone called the Kin, which was discontinued after a matter of months, is mostly remembered as one of the greatest flops in the history of consumer electronics.

Microsoft is now valued at over $1 trillion in market capitalization. While it has focused in recent years largely on its traditional business, the company has been in the news in recent weeks over its declared interest in purchasing the U.S. operations of the controversial Chinese social media app TikTok.