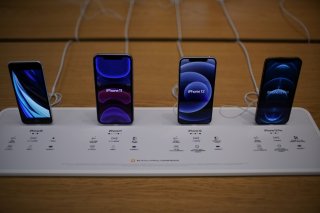 The 2020 lineup of iPhones have only been on the market since late October (the first two) and early November (the other two), but every indication is that they’re selling very well. In fact, a report earlier this week said that the two highest-selling 5G smartphones in the world in October were the iPhone 12 and iPhone 12 Pro, even though they were only available for part of the month.

Now, the same research firm behind that report, Counterpoint Research, is predicting that Apple may very well break its own records for shipments in the current quarter.

“The iPhone 12 consistently outperformed its predecessor during the first six weeks from launch – with the exception of week two, when strong early demand and ample supply delivered an exceptional sales week for the iPhone 11,” Jeff Fieldhack of Counterpoint said in the announcement, which compared the launch of the 2020 line with that of 2019.

“Double and triple-digit weekly sales increases for the iPhone 12 over the iPhone 11 – despite 12 Pro and 12 Pro Max shortages – is sending a strong signal, and we believe the iPhone 12 will bolster global quarterly shipment growth for all iPhones to 21% YoY,” Fieldhack added.

Throughout much of the year, there was speculation as to whether the coronavirus pandemic would lead to supply chain delays for this year’s iPhones. Apple acknowledged, in one of its earnings calls at midyear, that the lineup would arrive a few weeks later than usual, as most years the company brings out its iPhone line in September.

The new iPhones are seen as very popular worldwide.

“What we’re seeing is a combination of things driving iPhone growth globally,” Peter Richardson, Counterpoint's Global Head of Research, said in the release. “These include pent up demand for a new 5G iPhone with both operators and consumers hungry for the new iPhone products, attractive prices on the iPhone 12 aided by bountiful promotional offers. iPhone SE sales also helped momentum together with iPhone 11 longevity, and solid Singles Day, Black Friday and Cyber Monday performance.”

Counterpoint also addressed the long wait times that have sometimes been seen in the current iPhone generation.

“The iPhone Pro and Pro Max are on backorder in the US, but lead times have dropped significantly over the past three weeks. Power management ICs remain constrained, but Apple is likely a favored customer going to the head of the line,” Richardson added. “The India Wistron controversy is not material and Apple is managing the situation. And in terms of their output capability globally, it is better than last year on increased hiring, overtime incentives and factories running more hours.”