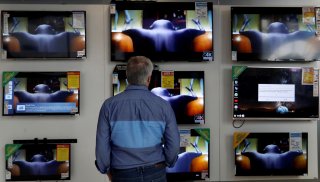 One of the many shortages currently being suffered by the economy is that of microchips. There are a few reported reasons for the shortage, including high demand for products during the last year, the Trump-era trade war between the United States and China, and other factors.

This has affected all sorts of products, especially cars. And now, a new report says that the chip shortage may soon extend to organic light-emitting diode (OLED) devices.

According to The Financial Times, the chip shortage may very well extend soon to the sort of OLED displays used on smartphones and televisions.

The report said that Samsung and Taiwan Semiconductor Manufacturing Company (TSMC), which are the world’s major suppliers of OLED chips, and both are now “under strain” due to shortages. In fact, prices have already begun to rise for the OLED chips.

“The shortage is not just about high-end chips anymore,” CW Chung, head of research at Nomura in Seoul, told The Financial Times.

“The shortfall now affects chips of all sizes and levels of sophistication, including chips critical for OLED display production . . . the input factors of all chips, from raw materials like silicon and metals to electricity usage, are largely the same—whether the end-product is an advanced chipset or a simple processor.”

Nikkei Asia reported back in March that such a shortage may be in the offing, and could even affect brand name smartphone supply chains in 2021.

“There’s a serious imbalance in supply and demand of chips in the IT sector globally,” Koh Dong-Jin, Samsung’s co-CEO, said in March, as reported by Nikkei.

“Clients will cope by boosting production of smartphones that use different telecom chips or liquid crystal displays,” one semiconductor manufacturer told Nikkei this spring about the potential shortage and its effect on smartphones.

However, DigiTimes recently reported that Apple is not expecting there to be a delay in this year’s iPhone lineup in connection with the shortages. That report also said that TSMS would give “supply priorities” to “automotive ICs and those placed by Apple in the third quarter of 2021, followed by chip orders for PCs, servers and networking devices.”

Shortage notwithstanding, a major new OLED product was announced Tuesday. Nintendo will bring out a new version of the Nintendo Switch featuring an OLED screen, the tech press reported. The new Switch will arrive in October at a price point of $349.99. The standard switch costs $299.99, while the Switch Lite costs $199.99.

The shortage had previously led to a separate shortage of video game consoles, with the most recent PlayStation and Xbox releases very much affected.