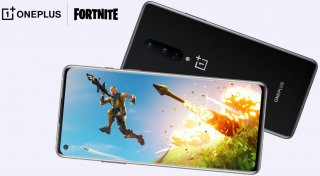 In the three years since its launch in 2017, Epic Games’ “Fortnite” has established itself as one of the most popular video games. It’s helped many kids out of school pass hours of times during quarantine and has even become a place for non-video game events, such as a Travis Scott concert and the trailer for Christopher Nolan’s next movie. One adviser to Joe Biden even suggested a holographic version of the presidential candidate appear in the game.

Now, Fortnite is heading to a new place: OnePlus smartphones.

The Chinese smartphone manufacturer announced this week that it is offering an “unprecedented Fortnite mobile user experience,” which will make Fortnite available in the Unreal Engine at 90FPS, which the companies call the highest frame rate in which Fortnite is available on a phone.

Users of such older OnePlus phones as the OnePlus 7, OnePlus 7 Pro, OnePlus 7T and OnePlus 7T Pro can play “Fortnite” at a maximum of 60 FPS, the companies said.

“OnePlus and Epic Games have created one of the best Fortnite experiences ever on a smartphone. The OnePlus 8 Series delivers a smooth, high framerate Fortnite gameplay experience—that even current generation console game systems can’t match,” Pete Lau, Founder & CEO, OnePlus, said as part of the announcement.

The collaboration took “months of development,” the company said, while OnePlus—in India only—will offer downloads of “Fortnite” via “One-touch” installation of the Epic Games App, through the “Game Space” application.

GameStop got an early look at the new functionality, calling it “impressive that the OnePlus 8 can run Fortnite up to ‘Epic’ graphics settings at a fairly consistent 60 FPS, too.” However, the site noted that when playing the game, “the overall graphics settings will default to ‘Low.’”

In April, OnePlus announced the arrival of the OnePlus 8 and OnePlus 8 Pro, a pair of 5G-equipped smartphones.

The global 5G smartphone market reached 24.1 million units sold in the first quarter, with Samsung leading the way with about a third of the market, followed by several Chinese rivals. OnePlus’ device, however, did not launch in time to be included. Apple is expected to unveil its first 5G iPhone later this year.