24 Million 5G Smartphones Were Sold Worldwide in the First Quarter. Who Sold the Most? 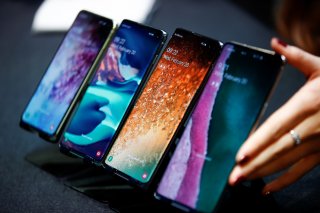 Smartphones with 5G capability are seen by many as a technology of the future, although they’re certainly available in the present. The next generation of wireless technology has even been at the center of outlandish conspiracy theories involving the spread of coronavirus, which have even led to the destruction of 5G towers in multiple countries.

Another indication that 5G has arrived is that millions of smartphones equipped with the technology have already been sold. According to a report by research firm Strategy Analytics, 24.1 million 5G smartphones were sold worldwide in the first quarter of 2020. Demand is highest in China - despite the coronavirus pandemic ravaging that country during that same quarter — but also growing in such markets as the U.S., South Korea, and Europe.

The market, at least so far, is a race between the South Korea-based Samsung and several China-based rivals.

Samsung led the way in market share, shipping 8.3 million units for 34.4 percent of the market. Huawei was second with 8 million for 33.2 percent, with a steep drop to third place finisher Vivo, with 2.9 million (12 percent.) Another Chinese manufacturer, Xiaomi, was fourth with 2.5 million (10.4 percent), followed by OPPO (5 percent) and "other" (5 percent.)

By comparison, demonstrating the fast growth of the sector, 18.7 million 5G smartphones were shipped worldwide in the entirety of 2019.

“Samsung vaulted into the lead in Q1 2020, shipping 8.3 million 5G smartphones globally in Q1 2020," Ville-Petteri Ukonaho of Strategy Analytics said as part of the announcement. "Samsung has strong global distribution networks and operator partnerships and new 5G smartphones in Q1 2020. Popular 5G models for Samsung include the S20 5G and the S20 Ultra 5G.”

Big changes, and big growth, are expected in the 5G smartphone market in the near future. Manufacturers, such as OnePlus and Motorola, have announced new 5G smartphones in recent weeks, with more to follow, and Apple is expected to unveil its first 5G-capable smartphone later this year.

While Chinese smartphone vendors had 61 percent of the market in the first quarter — essentially the entire non-Samsung portion — that will almost certainly be changing once Apple and other competitors get into the 5G race.

Strategy Analytics also noted that demand in China was higher than expected during the quarter, and is expected to grow as that region recovers from coronavirus.