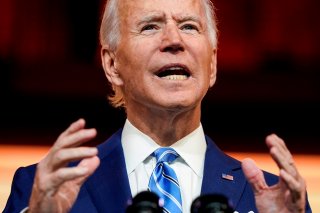 After four years in which the administration of President Donald Trump has frequently battled with major tech companies, many observers are eying what approach the incoming Biden-Harris administration will take towards Big Tech.

Biden, throughout much of his public life, has not taken nearly the adversarial approach towards Silicon Valley that Trump has, nor has he gotten himself into public feuds with any tech CEOs.

In the early going, Biden has sent mixed signals, naming a handful of obscure officials with ties to Silicon Valley giants to his transition team, including a former associate general counsel at Facebook and a former Apple vice-president for government affairs. On the other hand, Biden press aide Bill Russo shared a social media post critical of Facebook, and reports that Biden was eyeing a major role for former Google CEO Eric Schmidt do not appear to have come to fruition.

Among Biden’s early cabinet picks, there has been no one with significant ties to the tech industry. And now, a petition by nearly two dozen groups has urged the incoming president to keep it that way.

“Amazon, Apple, Facebook, Google, and Microsoft once promised innovation and opportunity, and while they continue to provide many remarkable products, they now represent serious threats to privacy, democracy, innovation, and Americans’ economic well-being,” the letter said.

“Despite the myth that Silicon Valley is rife with entrepreneurs and small businesses capable of disrupting entire industries, these companies have killed, rather than fostered innovation. And during the worst health crisis in recent history, Amazon has taken advantage of Americans struggling with the pandemic, tripling their profits on price gouged essential goods.”

The organizations signing the letter also offered to meet with Biden, and stated that “we look forward to working with your administration to address the harms posed by Big Tech.”

Once the new administration begins, they will be faced with numerous questions related to tech policy, including the possibility of restoring Obama-era net neutrality rules, as well as efforts to reform Section 230 of the Communications Decency Act, which Republicans have been arguing has led to “censorship” of conservative voices.

Biden will also need to choose who will chair the FCC, the agency that is tasked with regulating many of these issues.

The FCC recently announced that they are scuttling a proposal, also from the Obama area, to allow broadband mobile phone calls from airplanes.