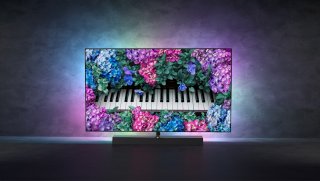 The OLED+935 line includes 55- and 65-inch models that are arriving this month, and a 48-inch version coming next month. This joins the 48-inch OLED models released earlier this year by Sony and LG, after no OLED TVs had previously been released in that smaller size.

The new line is described by the company as a Philips Ambilight TV, with a Bowers & Wilkins-supplied soundbar, which the company describes as “audiophile-quality,” combining Dolby Atmos Elevation speakers with that company’s Tweeter-on-Top technology.

The interface for the TVs is Google’s Android TV, with an “extended roster” of apps, although none are named in the announcement. In addition, the company has added a second dedicated artificial intelligence chip to its Gen P5 processor. And the company aims to reduce burn-in by using an advanced logo detection system in order to “monitor a grid of 32,400 zones, to very accurately detect static content and gradually reduce the intensity of its local light output and avoid burn‐in.”

“The Philips TV and Bowers & Wilkins partnership has enjoyed another stellar 12 months with the 2019 OLED+ models winning numerous awards and generally being hailed—by trade, media and consumers alike—as setting new standards for both outright TV picture and sound quality,” the company said in a press release. “Both partners share the same philosophy of continuous improvement and to every part of the product design, which has led to the launch of the new OLED+935; a Philips Ambilight TV that once again pushes the boundaries for what is possible for both picture and sound quality in the premium TV space.”

Philips, the Netherlands-based conglomerate, formerly made its own TVs, but in 2011, it sold the majority of the business to a new venture that’s now called TP Vision, which makes and markets Philips-branded TVs. The TP Vision-owned Philips TV brand is sold in Europe, Russia, South America and other markets, but not in the United States.

Philips stopped making TVs for the U.S. market in 2008, The New York Times reported at the time. Funai continues to sell TVs in the United States under the Philips name, under a licensing agreement, but that is unrelated to what TP Vision sells in other parts of the world.