RIP: Dish Network Is Near the End of the Road 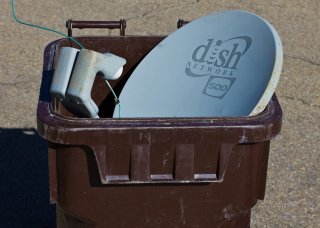 Life isn’t getting any easier for Dish, as it is now trying to curb the financial fallout from the COVID-19 pandemic by cutting staff and reevaluating its sputtering business.

The company did not disclose the number of employees it laid off. As of Dec. 31, Dish had 16,000 employees, according to SEC filings.

“The pandemic has forced us to take a closer look at every aspect of our business, at our work volumes, our areas of focus and investments, and the performance of our team members,” CEO Erik Carlson told employees in an internal memo.

“I want you to hear directly from me that we’ve made a series of difficult decisions to reevaluate parts of our business, particularly within In Home Services,” he added.

Much like its chief competitor DirecTV, Dish is struggling to stay afloat in the modern streaming age of Netflix, Disney, Hulu and Amazon. For years, Dish has struggled to retain pay-TV subscribers – in its most recent earnings call last quarter, the Colorado-based company said it had lost 194,000 subscribers.

About 94,000 of that figure came from Sling TV, which Dish owns. Due to increased competition, it was the first time that its over-the-top service lost subscribers since launching in 2015.

Dish boasted a total of 11.99 million subscribers at the end of 2019, compared with 12.32 million the year prior. All told, about 6 million abandoned satellite and cable in 2019, according to Wall Street analyst firm MoffettNathanson.

Dish, however, stands to greatly benefit from T-Mobile’s $26 billion takeover of Sprint, as the combined wireless company is expected to sell off certain assets to Dish, eventually making it the fourth-largest player in the U.S. wireless space.

With an eye on building out a 5G network, Dish has also been actively purchasing spectrum the last several years. In addition, Dish owner Charlie Ergen needs to raise about $10 billion to launch a 5G network that can cover 70 percent of the U.S. population by June 2023.

Since DirecTV and Dish do offer similar satellite TV services, there has been much talk about these two companies merging, although there would likely be some regulatory hurdles to jump over. Ergen and Wall Street insiders have asserted that this union is “inevitable.”