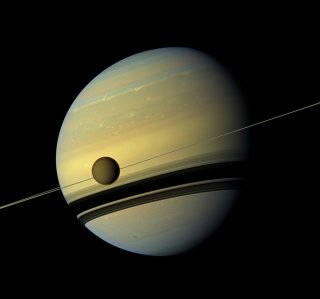 Just as our own moon drifts away 1.5 inches from Earth each year, Saturn’s moon Titan is also moving away in a similar fashion—just 100 times faster than previously believed.

The study, which was published in the journal Nature Astronomy, discovered that Titan is traveling away from the ringed planet at a rate of about four inches per year.

“This result brings an important new piece of the puzzle for the highly debated question of the age of the Saturn system and how its moons formed,” the study’s lead author Valery Lainey said in a statement.

Lainey conducted the research as a scientist at NASA’s Jet Propulsion Laboratory in Southern California before joining the Paris Observatory at PSL University.

While scientists know that Saturn formed about 4.6 billion years ago when the solar system was in its infancy, there’s quite a bit of uncertainty regarding when the planet’s rings and its 80-plus moons actually formed.

Titan, which boasts an atmosphere that is four times as dense as Earth’s, is currently about 759,000 miles from Saturn. In light of the revised rate of its drift, Titan likely started out much closer to Saturn—meaning the planet’s entire moon system expanded more quickly than previously thought.

“Most prior work had predicted that moons like Titan or Jupiter’s moon Callisto were formed at an orbital distance similar to where we see them now,” the study’s co-author Jim Fuller, Caltech assistant professor of theoretical astrophysics, said in a statement.

“This implies that the Saturnian moon system, and potentially its rings, have formed and evolved more dynamically than previously believed.”

One of Fuller’s theories predicted that outer moons can travel outward at a similar rate to inner moons because they can become locked in a special kind of orbital pattern—linking to a planet’s particular wobble and slinging them outward.

“The new measurements imply that these kind of planet-moon interactions can be more prominent than prior expectations and that they can apply to many systems, such as other planetary moon systems, exoplanets—those outside our solar system—and even binary star systems, where stars orbit each other,” Fuller said.

To come up with their findings, the researchers used data from NASA’s Cassini spacecraft, along with historical observations of the moon, some of which date back to 1886. Managed by JPL, Cassini observed Saturn for more than 13 years before exhausting its fuel supply. The orbiter plunged into the planet’s atmosphere in September 2017 to prevent biological contamination of Saturn’s potentially habitable moons.