Samsung’s Galaxy Note Isn’t So Dead After All, Report Says 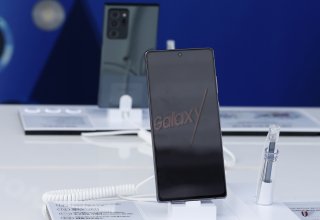 A series of reports in the last few weeks has indicated that Samsung was considering getting rid of its Galaxy Note line in 2021. In November, the Korean-language publication Aju News stated that Samsung would bring out the Galaxy Z Fold 3, the successor to this year’s well-received Galaxy Z Fold 2, in 2021, and that it would “replace” the Galaxy Note in the company’s lineup.

However, a new report, also out of South Korea, says that Samsung has denied the earlier speculation and that a new Galaxy Note will arrive next year after all.

The Yonhap News Agency, in a report Wednesday, quoted “a Samsung official” as stating that the Note remains an active product for the company.

“We are preparing to release the Galaxy Note series next year,” the official said, on condition of anonymity.

In an editorial published this week, Samsung mobile business chief Roh Tae-moon said that the company plans to release more products that will work with the S-Pen stylus, an accessory mostly associated with the Note. However, the official quoted by the Yonhap agency also said that “Roh’s message does not mean that the Galaxy Note series will be discontinued.”

The Galaxy Note, described as a “phablet” (phone/tablet) ever since its launch in 2011, has included new versions each year. In 2016, the “exploding battery” debacle led to the Galaxy Note 7 being recalled and scrapped entirely, but the Note brand endured, most recently with the arrival this year of the Galaxy Note 20.

The Galaxy Note 20 received mixed reviews—Android Central called it “the best and worst phone Samsung has ever made” and “a terrible value, but an ingenious business move”—and its reportedly sluggish sales performance is what set off speculation that the Note line was nearing its end.

The Galaxy Z Fold 2, on the other hand, earned rave reviews upon its arrival this summer, which most reviewers considered a significant improvement over the original Galaxy Fold the year before. The Aju News report had stated that the S-Pen would be offered with the Galaxy Z Fold 3.

According to Gartner Research, Samsung was the top-selling smartphone brand in the world in the third quarter of 2020, with 80.8 million units shipped and a 22 percent market share. Samsung was followed by Huawei, Xiaomi and Apple, although Apple shipped fewer than usual on account of new iPhones not arriving until the fourth quarter.

Samsung will hold a presentation during media day at CES on January 11, although that is expected to concentrate on TVs and other products. Samsung traditionally unveils Galaxy phones later in the year, at standalone events.