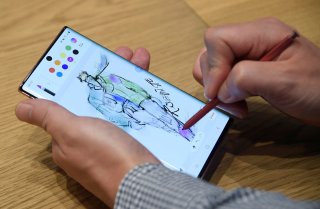 However, the tops were smaller than the previous two quarters when, due to the pandemic, sales had dropped 20 percent.

The Chinese manufacturer Xiaomi was third with 44.4 million, overtaking Apple, which had 40.6 million, with respective market shares of 12.1 and 11.1 percent. However, that number, as with all third-quarter smartphone numbers, comes with an asterisk, as Apple this year released its iPhone lineup in the fourth quarter rather than the third.

Oppo was fifth with 29.9 million units and an 8.2 percent market share, although the “other” category comprised a full third of the overall market, with 119 million units sold and 32.5 percent.

Samsung showed 2.2 percent growth year-over-year, while Xiaomi surged 34.9 percent from the third quarter in 2019. Huawei, Apple, Oppo and the “other” category all declined year-over-year.

“Consumers are limiting their discretionary spend even as some lockdown conditions have started to improve,” Anshul Gupta, senior research director at Gartner, said in the release of the numbers. “Global smartphone sales experienced moderate growth from the second quarter of 2020 to the third quarter. This was due to pent-up demand from previous quarters.”

Another research firm, IDC, had released its own figures at the end of October and found that the third-quarter smartphone market had declined just 1.3 percent, to 353.6 million. Those figures also ranked Samsung, Huawei, Xiaomi and Apple as the top four manufacturers, but listed Vivo as the fifth-place brand, rather than Oppo.

A third firm, Strategy Analytics, had similar results, finding that 353.6 million smartphones were shipped in the third quarter worldwide, lasso with Samsung, Huawei, Xiaomi and Apple as the top four.

In terms of U.S. shipments, per Counterpoint Research, Apple’s iPhone 11 was the top-selling smartphone in the United States for the fourth consecutive quarter, followed by two other Apple products, the iPhone SE and iPhone Pro Max. This was despite Apple not releasing new products during the third quarter.