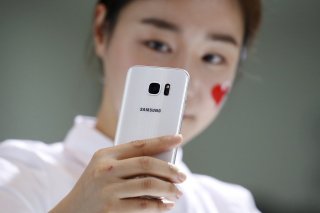 The global market for smartphones improved greatly from the second quarter to the third, while coming in just below the same quarter a year ago. Also, Samsung was once again the top smartphone brand in the world in the quarter.

That’s according to a pair of new reports, one from Strategy Analytics and the other from Counterpoint Research.

Strategy Analytics, in their Worldwide Quarterly Mobile Phone Tracker for the third quarter, found that 353.6 million smartphones were shipped during the quarter, which was ahead of the firm’s forecast for the quarter. This was attributed largely to “the re-opening of economies around the globe as COVID-19 restrictions were gradually relaxed.”

Samsung was the top manufacturer of smartphones in the quarter, selling 80.4 million units for a market share of 22.7 percent. Huawei, formerly the go-to brand, moved to second place with 51.9 million units sold and 14.7 percent of the market, while Xiaomi was third, with 46.5 million units shipped and 13.1 percent. Apple finished fourth, with 41.6 million iPhones shipped and an 11.8 percent share. Apple’s performance, down 10.6 percent over the year before, was attributed to the company not releasing this year’s iPhones until after the third quarter was over.

“While some of the topline numbers may not seem pretty, we are seeing a lot of improvement in the smartphone market both in terms of supply chains and consumer demand,” Ryan Reith, the program vice president for IDC’s Worldwide Quarterly Mobile Device Tracker, said in the announcement.

“In the large developed markets, it is very clear that 5G will be positioned to most consumers as their next phone regardless of which brand or price point they are focused on. Marketing has ramped up significantly. Products are widely available. Promotions are happening. And it’s clear that the top sales initiative in these markets is to push 5G. Having said this, we still believe consumer demand for 5G is minimal at best, which only adds to the price pressure on channels and OEMs.”

The other firm, Counterpoint Research, found in its latest Counterpoint’s Market Monitor Service that the global smartphone market had declined 4 percent year over year but jumped 32 percent quarter over quarter, to reach 366 million units, compared with Strategy Analytics’ number of 353.6 million.

Samsung was first in Counterpoint’s rankings, followed, much like in the other survey, by Huawei, Xiaomi, and Apple.

“Eased lockdown conditions in all key markets made way for exports and imports, thus streamlining the supply chain again. Also, the pent-up demand due to lockdowns helped the smartphone market take a recovery trajectory,” Tarun Pathak, associate director of Counterpoint Research, said in the release.