Samsung’s QLED HDTVs Are Amazing (But There's One Giant Catch) 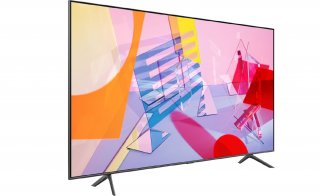 There are plenty of reviews out there unabashedly raving about Samsung QLED TV’s picture quality. For the most part, if you decide to eliminate LG’s OLED offerings from the discussion, they are right.

There is, however, one lurking weakness in QLED TVs that Samsung just can’t seem to make right—and that is the Tizen operating system.

First introduced in 2015 after years of development, the Tizen OS looked to simplify the user interface and make it possible to more easily connect TVs to nearby Samsung smartphones, tablets and smartwatches.

The vision was indeed there to make it into a strong competitor in the smart TV market. Samsung desperately wanted the Tizen OS to be part of the mainstream and ultimately the “OS of everything.”

Obviously, that did not happen.

Much like its Korean archrival LG’s webOS platform, the Tizen has a pleasant stripped-down interface but it really lacks any real punch that is needed for today’s data-heavy streaming TV world.

Yes, Tizen has access to run-of-the-mill apps like Netflix, Amazon and Hulu, but a platform like Android TV or Roku will give you much more bang for your buck. Moreover, Tizen really isn’t that flexible when it comes to sideloading apps, which could affect the TV’s use in different markets and regions.

If you have been using your smart TV to get your gaming fix, you may want to look elsewhere. Tizen has its own games but the choices are rather limited. The selection just doesn’t match up to what you can find on Android TV and Google Play Store.

What really irks users the most about Tizen is the digital assistant Bixby, which was first launched on the Galaxy S8 in 2017. Since then, many have shared on discussion boards and videos regarding their frustrations. There’s even a Reddit discussion on Samsung’s subreddit, titled “Bixby is the Worst.”

Despite the initial hype surrounding Bixby, it doesn’t come close to the skills of Google Assistant or Amazon Alexa, which can be found on rivals from LG to Sony. Its content-finding capability and general-information search are average at best. The latest generation of Samsung TVs, though, is able to respond to voice commands issued via Amazon Alexa and Google Assistant smart speakers.

In all fairness, Bixby is deemed good enough by Samsung to branch out to other areas of the company’s ecosystem, namely the Galaxy Home Mini. This new AI speaker uses Bixby to control multiple IoT devices through Samsung’s SmartThings platform.