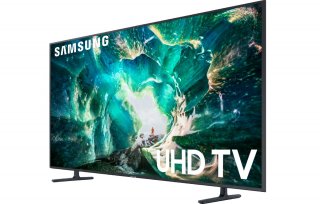 As each year passes, HDTVs do seem to be getting bigger and bigger. Within five to ten years, it wouldn’t be a stretch to claim that most American family rooms will have a set that’s 85 inches or larger.

If you don’t want to wait another decade to splurge on one of these mammoth HDTVs, look no further than Samsung’s 82-inch 8 Series LED 4K HDTV, which is now retailing for under $1,500 at Best Buy thanks to a recent sale.

No, this particular set doesn’t come with the much-coveted QLED or OLED display, but that really shouldn’t scare you off—it’s definitely more than passable for everyday TV-watching and family movie nights.

The 8 Series provides above-average picture quality with blacks that do get deeper than what you would expect from a non-QLED offering. And the colors are mostly accurate and supports most of today’s must-have HDR content.

As with most LCD-based panels, be aware that wide-angle viewing may fall short if you have high expectations, but that can be ameliorated by proper seating arrangements and utilizing a heavy-duty curtain or blinds to reduce those annoying glares and reflections.

The 8 Series employs Smart TV capabilities powered by Tizen, which for years has been a mixed bag for many users. First introduced in 2015 after years of development, the Tizen OS looked to simplify the user interface and make it possible to more easily connect TVs to nearby Samsung smartphones, tablets, and smartwatches.

The vision was indeed there to make it into a strong competitor in the smart TV market—and Samsung desperately wanted the Tizen OS to be part of the mainstream and ultimately the “OS of everything.” That, obviously, didn’t happen.

However, Tizen does give you access to popular apps like Netflix, Amazon and Hulu, but a more robust platform like Android TV or Roku TV will likely give you much more bang for your buck.

What really irks users the most about Tizen is the digital assistant Bixby, which was first launched on the Galaxy S8 in 2017. Since then, many have shared on discussion boards and videos regarding their frustrations. There’s even a Reddit discussion on Samsung’s subreddit, titled “Bixby is the Worst.”

Bixby, unfortunately, doesn’t come close to the skills of Google Assistant or Amazon Alexa, which can be found on rivals from LG to Sony. For the 8 Series, though, know that Google Assistant is conveniently built in.

As for the audio, the 8 Series features two pretty average 10W speakers, so what this particular TV won’t be is a hub for your music. The speakers could, however, possibly work in smaller rooms or the kitchen. If you’re seeking a more immersive cinema-like experience, it’s best to shop around for a decent soundbar.