Samsung QLED HDTVs Fail Miserably At This One Thing 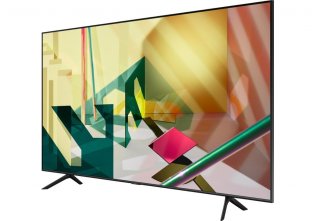 If you have a family of five or six and want to treat everyone to a wonderful movie night, perhaps getting yourself that highly reviewed Samsung QLED HDTV isn’t the smartest choice.

Compared to archrival LG’s OLED TV offerings, QLEDs have been shown to fail miserably when it comes to wide-angle viewing. So, if you have wraparound or side seating with terrible TV angles, at least one or two of your family members likely didn’t enjoy the movie as much as you did.

Keep in mind that despite the fancy name, QLED TVs are basically LCD TVs with quantum dots, which are microscopic particles that when hit by light, emit a certain different colored light. The source of this light is the LED backlight (which OLEDs lack), and that light must pass through more layers, such as the LCD layer, to produce the images on the screen.

QLED’s shortcomings can be blamed on the panel technology. As with all LCD-based displays, different areas of the screen can often appear brighter than others, and the backlighting can at times bleed through. When viewed at a side, the LCD layer has a certain thickness that can block some of the light coming through, and this is more pronounced at an angle.

QLED TVs can also lose contrast and look discolored or tainted if you happen to be stuck on the outside seating areas. However, if you are directly in front of the screen, the issues aren’t as apparent.

In contrast, with OLED TVs, you can count on an excellent viewing experience even from the most extreme angles. OLEDs have no need for backlighting and boast self-emissive pixels, which provide almost perfectly uniform screens—even when viewing from the side.

Because OLED pixels can remain completely dark, the black color on your screen is basically 100 percent true. QLED TVs, though, even with the most effective full-array local dimming, still let some light through, leading to more washed-out black levels.

To its credit, Samsung is constantly on the lookout to improve wide-angle viewing on its QLED TV offerings. There certainly have been improvements in the more recent models, but for QLED to reach the much-vaunted levels of OLEDs, that would likely mean overhauling the entire display technology behind the TVs.