Secretive X-37B Space Plane Is Heading Back Into Action. But Doing What? 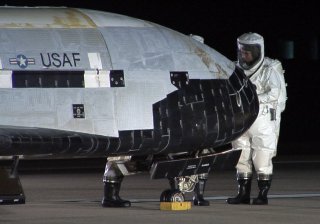 The U.S. military has confirmed that it will be sending its high-tech X-37B spacecraft back into orbit later this month.

This will be the sixth trip for the reusable vehicle, which conducts secretive missions while circling the planet. While U.S. Air Force doesn’t usually say what the drone will be doing, a little more concrete information has been released to the public this time around.

“The Air Force’s Rapid Capability Office has combined forces with the Air Force Reserve Research Lab and now the U.S. Space Force to execute a mission that maximizes the X-37B’s unique capabilities,” Air Force Secretary Barbara Barrett said during a webcast hosted by the Space Foundation.

“This important mission will host more experiments than any prior X-37B flight, including two NASA experiments.”

Once in orbit, the spacecraft will deploy a small FalconSat-8 research satellite.

In expanding the details of the experiments, Barrett said: “One is a sample plate evaluating the reaction of select significant materials to the conditions in space. The second studies the effect of ambient space radiation on seeds. A third experiment, designed by the Naval Research Laboratory, transforms solar power into radiofrequency microwave energy, then studies transmitting that energy to Earth.”

The sample plate and seeds experiments will be conducted for NASA, the Air Force said in a statement.

Also known as the Orbital Test Vehicle, the spacecraft will launch from Cape Canaveral, Florida, on May 16. Barrett added that the Space Force was dedicating this particular flight to “first responders and frontline professionals.”

The Air Force owns the X-37B, but the recently established Space Force is responsible for all aspects of the launch, operations, and landing.

The classified nature of X-37B’s previous missions has driven forward suggestions that the robotic spacecraft is involved in testing military space technology related to reconnaissance satellites.

It also has been spotted in relatively low altitudes—even lower than the International Space Station that orbits 250 miles above Earth—which has opened up theories that the U.S. is looking to move spy satellites to more advantageous orbits.

The X-37B space plane has spent a total of 2,865 days in space, including 780 days in orbit for its most recent mission that was completed in October 2019.