Sorry, Marvel Fans: “The Falcon and the Winter Soldier” Won’t Arrive in August 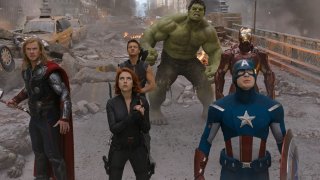 Last spring, along with the next phase of Marvel Cinematic Universe movies, Disney announced several series featuring Marvel characters that would appear on Disney+. These series, like the movies, would be produced by Marvel Studios, not by Marvel Television, which was behind “Agents of S.H.I.E.L.D” and other previous Marvel TV shows.

One of those shows was “The Falcon and the Winter Soldier,” featuring the titular characters, played by Anthony Mackie and Sebastian Stan, who have appeared throughout the MCU movies. The show began filming last fall, and was to arrive on Disney+ later this year. But now, we know it won’t be making an August release date.

Deadline reported Friday that “The Falcon and the Winter Soldier” won’t be debuting in August, after Disney put out a list of scheduled August premieres that did not include the show.  The series started filming in March, due to the coronavirus pandemic, and there’s no word yet on when the series might start filming again.

Another Marvel show, “Wandavision,” is set to arrive in October, and appears on track to make its release date, Deadline said. And the second season of “The Mandalorian” finished production and will likely also arrive on Disney+ in October.

Mackie’s Falcon character, whose real name is Sam Wilson, took the Captain America shield from Chris Evans’ Steve Rogers at the end of 2019’s “The Avengers: Endgame,” and the new show will focus on his adventures, alongside the previous Captain’s lifelong friend, Bucky Barnes.

Among Disney+ premieres scheduled for August are “X-Men,” “The Peanuts Movie,” “Prince of Persia: The Sands of Time,” “Star Wars Galaxy’s Edge: Adventure Awaits,” and “Ant-Man and the Wasp,” one of the last MCU movies that hadn’t yet been available on Disney+ “The Greatest Showman” will also be arriving on the service August 14. “Beauty and the Beast” will also join the service August 21, while “Alice Through the Looking Glass” and “Fantastic Four” bows August 28.

Disney+ is believed to have gained a huge new amount of subscribers in early July, following the debut of “Hamilton,” the filmed version of the popular Broadway musical.