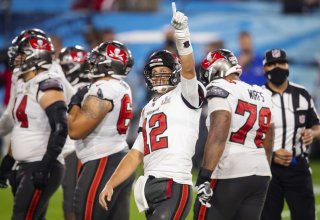 After a twenty-four-hour delay, the ratings are in for Sunday night’s Super Bowl LV, in which the Tampa Bay Buccaneers defeated the Kansas City Chiefs 31-9, giving quarterback Tom Brady his record seventh Super Bowl win, and his first after leaving the New England Patriots.

The Super Bowl was seen by ninety-two million viewers, per a press release from Nielsen. The game had a 38.2 household rating in the United States and was viewed in 46.2 million homes, while 68 percent of U.S. homes who were watching television were watching the game.

CBS said in a press release that it had an audience of 96.4 million across all of the channels on which it was available, including streaming, the CBS app, and the other places where the game was available. The game also broke the record for the most-streamed football game in NFL history, with an “average minute audience” of 5.7 million viewers.

Per USA Today, the ratings of the game, at least in terms of the television broadcast only, were the lowest since the Super Bowl in 2017. This appears to have reflected the tendency of more viewers to stream the Super Bowl or watch it through alternative means. The highest-rated Super Bowl ever was Super Bowl XLIX, between the Patriots and the Seattle Seahawks in 2015.

One thing that likely hurt the ratings of this year’s Super Bowl was that the game was something of a blowout, and the outcome wasn’t in much doubt for most of it. And with fewer viewers attending parties than usual, due to the pandemic, there was likely less apprehension about turning off the game early. That 2015 Super Bowl that broke ratings records went right down to the wire, indicating that most viewers kept it on until the very end.

In addition, the Super Bowl is almost certain to go down as the most-watched broadcast of any kind for the entire year of 2021, as the Nielsen ratings for broadcast television continue to be dominated by NFL telecasts. There’s nothing else on the pop culture map that’s capable of delivering over ninety million viewers at the same time.

Super Bowl Sunday also offered a “record-breaking day” for sign-ups, streams and time spent on the streaming service CBS All Access. That service will be succeeded in March by Paramount+, which was heavily advertised by CBS during the game broadcast.

While ratings for the Super Bowl are usually available the morning after the game, there was a delay this year in Nielsen’s release of the numbers. According to Deadline, the numbers were “still being processed and verified” as of Monday night, before they ultimately were released on Tuesday morning.