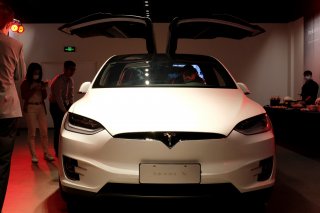 Following a face-off between CEO Elon Musk and officials in California about the reopening of one of the company's plants, Tesla is planning another ramping up of production.

According to a memo from Musk himself that was obtained by CNBC, the company is getting ready to start “volume production” of its Semi commercial truck.

“It’s time to go all out and bring the Tesla Semi to volume production. It’s been in limited production so far, which has allowed us to improve many aspects of the design,” Musk's leaked memo said. “Production of the battery and powertrain would take place at Giga Nevada, with most of the other work probably occurring in other states.”

The Semi was unveiled in 2017, and it's not to be confused with the Cybertruck, the consumer truck that Tesla introduced late last year. Musk has said that he's looking to use domestic production for that product.

Last month, Tesla revealed that it is cutting prices in the U.S. for several of its cars. A Tesla car was also seen in a viral video from Taiwan crashing into a truck, while being driven in Autopilot mode.

Also this week, per electric car news website Electrek, Tesla launched a new car-sharing feature, in which Tesla owners can add access to up to five drivers at once.

And according to Automotive News, there's good news for another cutting-edge car company that's named after inventor Nikola Tesla.

Nikola Corp., the battery-electric and hydrogen fuel-cell truck maker that recently debuted on the Nasdaq was valued at $34 billion at one point Tuesday, despite forecasting no revenue this year. Not only that, but the company won't deliver its first car, the Tre battery-electric semi-truck, until next year, and the company projects it won't make any use of its Arizona plant for eight more years.

Even so, Nikola is now worth more than Ford Motor Co., which is currently valued at just over $27.6 billion. Tesla, however, is valued at over $187 million.

“People are looking at this as the next Tesla, and they’re being stupid. Investors are being ridiculous,” analyst Sam Abuelsamid of Guidehouse Insights, told Automotive News. “While I think the tech absolutely has the potential to be disruptive, I don’t know that Nikola in and of themselves are, necessarily.”