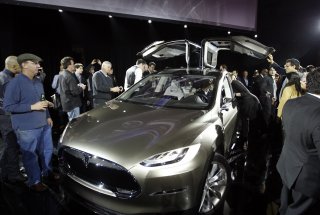 Tesla announced Wednesday that it is filing suit against both the federal government, U.S. Trade Representative Robert Lighthizer, and acting Customs and Border Patrol Commissioner Mark Morgan. In the suit, filed with the U.S. Court of International Trade, Tesla is seeking to void two batches of the tariffs put into place by President Donald Trump, and also to get a refund, with interest, of the amounts it already paid, per CNBC.

Tesla, per the report, is challenging list three and list four of the tariffs. The former placed 25 percent duties on goods imported from China, while the latter consisted of a  7.5 percent tariff on $120 billion of Chinese imports. Various companies, including Apple, have sought and been granted waivers from these tariffs. Tesla received temporary waivers for artificial graphite, silicon oxide, and door ring tailor welded blanks, although officials rejected Tesla’s request for relief related to the Model 3’s car computer and screen, CNBC said.

Tesla CEO Elon Musk, back in 2017, stepped down from two of President Donald Trump’s business advisory councils, after the president announced that the United States was withdrawing from the Paris climate accords.

“Am departing presidential councils. Climate change is real. Leaving Paris is not good for America or the world,” Musk said on Twitter at the time. But he has never engaged in any type of full-on feud with the president, the way some other CEOs have.

The announcement of Tesla’s lawsuit against the government, and the outage, followed “Battery Day” on Tuesday when Tesla announced what it called a roadmap to cheaper and more efficient batteries, while also aiming for a $25,000, fully autonomous car within three years.

The Battery Day announcement underwhelmed analysts, according to MarketWatch.

“Overall, Tesla’s battery day was long on vision and boldness, but short on specifics and near term deliverables,” Toni Sacconaghi of Bernstein said in a note following the event. The company’s stock, indeed, had dropped 10 percent on the day, as of Wednesday afternoon.

Tesla, for the second quarter of 2020, posted a blockbuster quarter, with revenue of $6.04 billion, and $104 million GAAP net income, despite the company’s facility in Fremont, California, being closed for half of the quarter.

Tesla isn’t the only electric car company named after Nikola Tesla that’s in the news this week. The founder of Nikola, a startup focused on electric trucks, abruptly resigned this week, followed a research report which accused the company of fraud. This included the allegation, per Ars Technica, that a promotional video showing the Nikola One truck driving on a highway two years ago actually showed it going downhill. Both the Department of Justice and the Securities and Exchange Commission have reportedly opened investigations into the matter.