Why Buy Star Wars in 4K Ultra HD Blu-ray When Disney+ Has It? 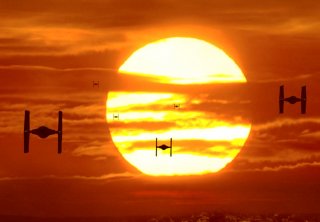 Today is the annual Star Wars Day-May the 4th- and it doubles as the day that Disney is putting the 2019 movie "Star Wars: The Rise of Skywalker" on its Disney+ streaming service. Its arrival means that all eleven live-action "Star Wars" movies are now available to stream for Disney+ subscribers.

Disney, as it earlier did with "Onward" and "Frozen II," has placed "Rise of Skywalker" on its streaming service earlier than originally planned, with coronavirus keeping large segments of its audience at home. In the case of the "Star Wars" film, the impending streaming release hasn't stopped it from topping the Amazon sales charts across all three physical media categories-DVD, Blu-ray and 4K/Ultra HD-for the last several weeks.

Why buy the movie on physical media when you can just stream it? There are a few good reasons for that.

One is that for "Star Wars” fans, the force of completism is strong. "Star Wars" is a property in which a large cohort of die-hards has made a habit for years of purchasing a physical copy of the franchise's releases, one that goes back to the early days of home media.

Many "Star Wars" fans have likely bought different editions of the original trilogy as many as five or six times-on VHS, DVD, and Blu-ray, and in different configurations. These fans have gone ahead and bought even the movies that many of them claim to loathe, whether it's the prequels or "The Rise of Skywalker" itself, which was tepidly received when it arrived last December. Even many of the sort of "Star Wars" fans who have authored 5,000-word screeds about how Disney ruined "Star Wars" have likely nevertheless ponied up to buy the movies.

If you’re one of the many people who have a shelf in your home dedicated to all of the "Star Wars" movies, you're going to buy the latest one as well.

There are also other things offered by the physical releases, starting with special features. The "Rise of Skywalker" 4K Blu-ray includes three discs total, including special documentaries and other features not available on the streaming version.

The 4K Blu-ray goes for $24.99-the cost of nearly four months of Disney+ - but there's little doubt that people will pay it.

There are also some buffs who are distrustful that their favorite movies and shows will remain available on streaming services, and therefore prefer to stick with physical media. This is often a valid concern, although it's a fairly good bet that for as long as Disney+ exists,  and as long as Disney owns "Star Wars," the "Star Wars" movies will remain available on Disney+.

What about the picture and sound quality? Disney+ is available in 4K, but only for certain content, and for those who have 4K devices. Every "Star Wars" movie is available in 4K on Disney+. While some die-hards believe that the 4K resolution on Disney+ and other streaming services is too compressed and inferior to that of a 4K Blu-ray picture, others likely won't notice the difference.

As for sound, the quality of that likely has more to do with the user's equipment than with the source. Disney+ offers much content, including "Star Wars," in Dolby Vision and Dolby Atmos, but that's only for those with that system installed in their homes, and questions were raised at the launch about how well that capability was being handled.

Those wishing to experience "The Rise of Skywalker," and the rest of the "Star Wars" canon, will have many options for doing so. But as with many other aspects of the "Star Wars" fandom that's led to contentious arguments in recent years, there's no right or wrong way to do it.