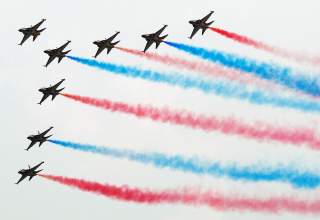 The United States State Department is at the Singapore air show this week to help U.S. defense contractors to make inroads into the Asian market.

“I’m responsible for the conduct of our defense sales across the globe but with particular reference, at least over the next few days, to the Indo-Pacific,” State Department principal deputy assistant secretary for Bureau of Political-Military Affairs Tina Kaidanow told reporters on Feb. 5.

“This is an increasingly important region of the world for us. This is something we are really committed to developing these partnerships both in the bilateral sense but also in a multilateral sense.”

As one of the largest defense trade shows in the region, Singapore is an opportune venue to promote U.S. interests in Asian defense market. “Over the next few days I will be speaking both to representatives of the individual countries that will be here at the show but also to some of our U.S. companies and to others so it’s a real opportunity for me and I’m looking forward to it,” Kaidanow said.

However, American interests in the Asian defense market is not just commercial—it is a means of shoring up U.S. alliances and building new partnerships in the region as a hedge against growing Chinese influence. “There are a number of countries that we’ve been dealing with on a repeated basis, lots of countries where we have an extended defense partnership, and I’m sure I will be seeing a number of them in the next few days,” Kaidanow said. “Today I know I’ll be seeing the Japanese and the Canadians. I’ve got some meetings I think that will probably end up being with some of the others in Southeast Asia in the next little while. Of course, I was just in Vietnam so I had a chance to speak to folks there and again, I can’t give you a list. And just because I see them here at the show doesn’t necessarily signify. I see them in Washington all the time. There’s a variety of opportunities that I take to go back and forth with some of the representatives of countries in the region.”

Kaidanow has found a receptive audience in Asia. “This is a great opportunity here in Singapore to make the case that I just made which is to say that our products are not only the highest in quality. I think that’s pretty much indisputable,” Kaidanow said. “I think it’s also the case that they come with an array of efforts that we can provide that nobody else can provide and that kind of thing has been a continued feature as a strong selling point for us, for our industry, and so forth. And it is my job, obviously, to make that case as effectively as I can to all of our interlocutors but I don’t have to try that hard usually because I think that’s generally acknowledged. So we found a lot of receptivity among our partners for purchasing our systems and for giving us further requests if they need more information and so forth and we’re absolutely happy to work with all of them on those requests.”

One of the products on display during the Singapore air show is the F-35—which the U.S. has been aggressively marketing. “Whether it’s F-35s, whether it’s anything else, the Singaporeans have been very, very productive partners for us,” Kaidanow said. “We have provided them with an array of defense articles. I’m sure that there will be more in the future. That’s not a question and it’s just a function, again, of discussing with them in some detail what we can do for them, what they need. These are always their sovereign decisions. I always say that. That’s the first thing I say about any of the countries in the region. I don’t like to comment for them. It’s simply for us to say that we are committed to giving them the full array of information that they need in order to make these types of decisions.”