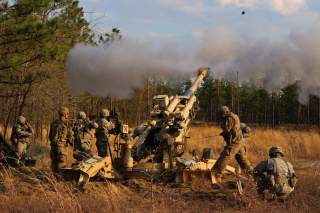 America’s Army is at a crossroads. U.S. troops have transitioned largely to a supporting role in Iraq and Afghanistan, but new challenges loom on the horizon. Russia is increasingly assertive and has modernized its ground forces. U.S. soldiers are training, advising, and assisting partners around the globe. The Army needs to be able to respond to a range of challenges today, while modernizing for future needs. This is not the Army the United States has been building, however. The Army has borne the lion’s share of defense cuts in the recent budget downturn. The result is that while the United States has the most combat-experienced professional Army it has ever seen, readiness is suffering, force structure has been cut to the bone, and much-needed modernization initiatives are not funded. Major investments are needed to prepare the Army for present and future challenges.

Last month, I participated with my colleagues Jerry Hendrix and Elbridge Colby in a strategic choices exercise hosted by the Center for Strategic and Budgetary Assessments where we built an alternative 10-year budget for the Department of Defense. We assumed up front that a new Administration was able to achieve a budget deal with Congress that resulted in stable funding, a prerequisite for getting the Department of Defense back on its feet, but assumed only modest budget growth. More money would be nice, but fiscal realities are likely to force defense leaders into hard choices, so we wanted to reflect that in our exercise. We assumed (prior to the election) a total DoD base budget topline two percent above the 2017 President’s Budget request. It’s possible that a Republican-controlled Congress and White House could lead to a higher topline, but President Trump will have to reach an agreement with Republican deficit hawks in Congress. The flush post-9/11 years are likely gone. Despite a constrained budget, in our exercise we were able to significantly improve readiness, capability, and capacity across the joint force. We did this by cutting legacy forces less suited to future challenges and reforming Pentagon processes. For the Army, we were able to increase readiness, modernize the force, and sustain active duty end-strength all within this topline.

Our strategic focus for the Army was building ready, modern, and forward-stationed ground forces oriented primarily to deter Russian aggression in Europe. The Army has a range of missions around the globe, but Russia is the “pacing threat” for the most sophisticated adversary the Army might face in land warfare. Despite the warm rhetoric, President Trump will need a strong military if he is going to have leverage at the negotiating table across from Vladimir Putin.

To meet this threat, we preserved overall active duty Army end-strength at approximately 450,000, while shifting the force mix from light infantry to armor, precision fires, missile defense, and electronic warfare. We increased active duty armored brigade combat teams (BCTs) from nine to 12, reconstituting two of those from reserve component equipment to save money. We also increased active duty force structure in fires and missile defense, including High Mobility Artillery Rocket Systems (HIMARS) battalions and Patriot and Terminal High Altitude Area Defense (THAAD) missile defense batteries. The team further invested in new short-range cruise missile units. These cruise missile units would be equipped with new ground launched cruise missiles that extend the Army’s organic land-based precision fires capability up to the 500 kilometer limit permitted under the Intermediate Nuclear Forces (INF) treaty. We also invested $3 billion in land-based mobile electronic warfare capabilities to operate in a contested future electromagnetic environment. We sourced these new units with personnel from the four active duty Infantry BCTs that we eliminated. In order to ensure these and other units from across the Army were ready to fight, we increased depot maintenance for vehicles and flying hours for Army aviation.

While reorienting the Army for today’s challenges, we modernized Army equipment for future threats. We began the process of replacing aging Bradley fighting vehicles with a new infantry fighting vehicle. We chose an option derived from the existing German Puma vehicle, but other options are available on the global market. Our guiding assumption was that, while the Bradley was approaching the limit of what was possible with further upgrades, building a new vehicle from scratch was neither necessary nor cost-effective. We also invested in active protection systems to protect tanks and fighting vehicles, a necessity to defend against increasingly lethal anti-armor weapons.

To prepare the Army to defeat a high-end adversary, we invested heavily in advanced munitions. We procured additional Excalibur precision-guided artillery rounds. We increased Guided Multiple Launch Rocket System (GMLRS) missile stocks by 25 percent. We also accelerated the Army’s long-range precision-fires program to replace the Army Tactical Missile System (ATACMS), so that the first new missiles would be fielded by 2020.

Precision fires are only as precise as their targeting data, and we complemented these investments with advanced sensors, such as unattended ground sensors to detect enemy forces. To move all this data in a contested electromagnetic environment, we invested in thousands of advanced communications terminals, including low-cost protected SATCOM-on-the-move. We also invested in cyber capabilities to protect DoD’s networks and go on the offense, including tactical cyber combat teams and cyber protection teams.

The United States does not have a monopoly on long-range precision fires, so we harnessed new technologies to improve U.S. defenses against guided rockets, artillery, mortars, missiles, and drones. Currently, the cost-exchange ratio of attacking-to-defending missiles favors the attacker, so we invested in technologies that would fundamentally change this equation. We acquired truck-mounted high-energy lasers to shoot down rockets, artillery, mortars, and drones. For harder ballistic missile threats, we invested in land-based electromagnetic rail guns. We also acquired 25,000 surface-to-air precision high-velocity projectiles that could be fired from rail guns or 155mm howitzers to take out incoming ballistic missiles. These investments will help tip the balance back in favor of Army forces on the defense, allowing them to operate effectively in an increasingly lethal future combat environment and enable other services in joint operations.

One of America’s core warfighting advantages is having the best trained military in the world. To sustain America’s warfighting edge in the human dimension, we invested in human enhancement technologies. People are the centerpiece of every function the military does, and there is no task that cannot be improved by improving human performance. Recent advances in pharmaceuticals and new training techniques, such as transcranial direct current stimulation (tDCS), have shown tremendous potential in increasing human cognitive and physical performance. We invested $1 billion in human performance enhancement research to better understand these technologies, many of which are already used in non-military settings, and uncover where best to leverage them for operational advantages.

These ready, modernized ground forces have to get to the fight to be relevant and there is no easy way to move land power across oceans. To deter an increasingly assertive Russia, the Army needs to not just be ready and modern but also forward-deployed in Europe. We moved two armored BCTs, a Stryker BCT, and a combat aviation brigade back to Europe to be the backbone of America’s presence in Europe.

At the same time as we refocused the Army on deterring Russia, training, advising, and assisting partners remains a core mission of the Army. Indeed, it is one that, even after fifteen years of doing it in Afghanistan and Iraq, could still use some improvement. The Army’s current approach to resourcing training and advising missions consists of removing mid-grade NCOs and officers from combat units. This is inefficient and damages readiness, leaving hollowed-out units that are not ready to deploy without key leaders. Instead, we moved out on a new concept Army Chief of Staff General Mark Milley has outlined: Advise and Assist Brigades (AABs) that would consist of key leaders of a combat brigade, but without the lower-ranking troops. AABs would be the primary sourcing unit for training and advising missions, allowing BCTs to remain whole and ready to fight. AABs also serve an important secondary purpose in providing a pool of mid-grade NCOs and officers to serve as the seed of new BCTs if the Army needs to reconstitute units and expand the force for a future contingency. Experienced leadership is the biggest limiting factor on rapidly growing new units, and these leaders provide a hedge against future threats. In total, we placed 3,000 soldiers into AABs. To meet this and other personnel needs, in the first FYDP we modestly relaxed Army active-duty end-strength caps, increasing from 450,000 under the current budget to 453,000 in our plan.

Special operations forces (SOF) are also a key component of land power and the Army is the largest contributor of SOF personnel. We sustained SOF end-strength and increased investments in key areas, such as language training and regional hubs for basing and access into austere areas.