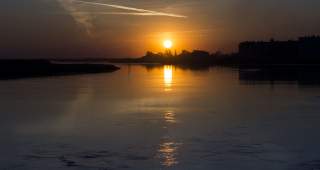 China’s One Belt, One Road Initiative has become a major foreign policy priority. The land-based Silk Road Economic Belt aims to expand China’s economic connections and political influence across much of Eurasia through vast infrastructure and investment schemes, potentially involving over 40 countries. But reviving the ancient Silk Road will not be easy. Water conflicts, as elsewhere, are top on the list of potential challenges.

Water conflicts have already been a source of tension between China and Kazakhstan. Kazakhstan is concerned by China’s increasing attempts to divert water from the Ili and Irtysh rivers to meet the rising water demands of Xinjiang’s booming petroleum sector. During the late 1990s, China built a canal that transfers water from the Irtysh River, which is shared between China, Kazakhstan and Russia, into several dry basins in central-north Xinjiang.

The Irtysh is the main source of fresh water for around 15 million people, mostly living in Kazakhstan’s larger north-eastern cities, including the capital Astana. Chinese water diversion projects could therefore threaten Kazakhstan’s urban and industrial development. Some environmentalists have even warned that Lake Balkhash, which receives 80 per cent of its water from Ili River, could become a desert. Managing this issue will be a major challenge in the bilateral relationship looking forward.

Water conflicts between Central Asian countries could also destabilize the region and create hurdles for China’s Silk Road Economic Belt. Since the early 1990s, water disputes due to the conflicting needs and priorities of upstream and downstream countries have been a major source of tension in Central Asia.

The three downstream Central Asian countries, Turkmenistan, Uzbekistan and Kazakhstan, are blessed with abundant oil and gas but have very limited fresh water resources. Two major rivers — the Syr Darya and the Amu Darya — account for 90 per cent of Central Asia’s river water and 75 per cent of the water used in irrigated agriculture. Both are under the control of the two upstream states: Kyrgyzstan and Tajikistan, which see the construction of hydroelectric dams as a key way to meet their energy needs.

The lack of a viable regional framework to replace the Soviet system of water management has led to armed conflict between Kyrgyzstan, Tajikistan and Uzbekistan. Islam Karimov — the late president of Uzbekistan — openly warned that completing dam building plans without regard for downstream countries could lead to wars. In particular, he vigorously resisted Tajikistan’s Rogun Hydropower Plant Project, referring to numerous risks it posed for downstream countries. But two months after Islam Karimov’s death in September 2016, Tajikistan’s president decided to continue with the project.

With the beginning of the construction of the Rogun Dam, tensions over shared waters are likely to rise. The stakes are high. China should pay close attention to the risks posed by water conflicts to its Silk Road Economic Belt.

China needs to lead by example by successfully managing the Ili and Irtysh rivers with Kazakhstan. Encouragingly, compared with its water policies on other major transboundary rivers, China has a relatively high level of institutionalized cooperation with Kazakhstan. For instance, the two countries signed an agreement on the common use and protection of transboundary rivers in 2001. And they launched the China–Kazakhstan Friendship Joint Water Diversion Project on the Khorgos River in April 2011.

China can take the lead in mediating water disputes among Central Asian countries. As a first step towards this aim, China needs to expedite the conclusion of a comprehensive Agreement on Water Distribution of Cross-Border Rivers.

More importantly, China could help facilitate the adoption of the ‘nexus approach’ to managing water conflicts in Central Asia. The nexus approach recognises that water, energy and food systems are inseparable. Food production accounts for 70 per cent of total global freshwater withdrawals, making it the largest user of water. Water is also needed to produce, transport or use all forms of energy. Meanwhile, the food production and supply chain consumes about 30 per cent of total global energy. And energy is needed to produce, transport and distribute food as well as to extract and treat water.

Efforts in the food and energy production systems could therefore help to alleviate water stress in Central Asia. While agriculture consumes 70 per cent of the fresh water usage in Central Asia, 50–80 per cent of that is wasted due to faulty irrigation systems. Agricultural modernization will help to keep regional water conflicts under control. China has much to offer on this front.

Third, by promoting interregional and intraregional agricultural trade across Central Asia, China could help facilitate the development of a better cropping structure. For instance, by importing water-intensive crops such as rice and wheat, Uzbekistan could allocate more of its arable land to the production of drought-resistant crops like potatoes.

Finally, rebuilding the regional energy market in Central Asia could help to normalize water ties between the downstream and upstream countries. With some 300 days of sunshine per year and vast wind resources, the potential for renewable energy production in Central Asia is enormous. After years of massive investment, China is now the leading producer of renewable energy worldwide. Greater Chinese investment and technological transfer in Central Asia’s solar and wind sectors would contribute to the regional’s energy security and avert its current water crisis.

Tensions over water in Central Asia present China with a major opportunity to provide crucial regional leadership. China could not only contribute to alleviating a major source of tension in the region but also help shore up its Silk Road Economic Belt project.