Can Shinzo Abe Keep Rodrigo Duterte Away from China? 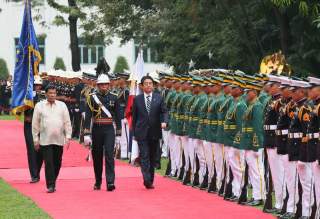 As electoral shocks overhaul the Asian geopolitical landscape, Japanese Prime Minster Shinzo Abe is on an all-out charm offensive. When Donald Trump Jr. pulled off a surprising electoral victory on the back of a populist, anti-globalization rhetoric, the Japanese leader immediately scrambled to secure a meeting with the president-elect.

In fact, Abe became the first head of government to visit Trump Tower after the November elections in the United States. However, there is little indication that the Japanese leader managed to change the president-elect’s views on some of Tokyo’s key strategic concerns, particularly the Trans-Pacific Partnership (TPP) agreement.

Well before meeting Trump, however, Abe was already on a mission to win the favor of the Philippines’ tough-talking leader, Rodrigo Duterte, who has been dubbed as the “Trump of the East”. In his first six months in office, Duterte has shaken up the regional geopolitical landscape to the consternation of traditional allies such as Japan.

A self-described socialist with a long history of tense relations with the United States, Duterte has managed to recast his country’s foreign policy more radically than any of his recent predecessors in Manila. Vowing to pursue a more independent foreign policy, Duterte has gradually downgraded military relations with Washington in favor of closer economic and military ties with China and Russia. In recent months, Manila has moved towards terminating major joint military exercises with Washington, namely the Cooperation Afloat Readiness and Training Exercise (Carat) and the joint U.S.-Philippine Amphibious Landing Exercise (PHIBLEX).

Manila’s deteriorating ties with Washington have gone hand in hand with improved ties with Beijing. In fact, the Dutetre administration is now considering military agreements with both China and Russia. In a dramatic departure from its predecessor’s hawkish foreign policy on China, the Duterte administration has effectively sidelined the Philippines’ landmark arbitration case against China in the South China Sea, advocated for joint development schemes in disputed South China Sea waters, and often described Beijing as a friend and partner. With the Philippines assuming the chairmanship of the Association of Southeast Asian Nations (Asean) this year, Duterte has signaled minimum interest in mobilizing regional pressure against China’s maritime assertiveness, even though other Asean members, like Vietnam and Singapore, would be happy if the organization stepped up the pressure on Beijing.

Thus, Abe’s recent two-day visit to the Philippines came at a critical juncture in Asian geopolitics. Tokyo is deeply troubled by deepening tensions between Manila and Washington, particularly over Duterte’s controversial campaign against illegal drugs. In many ways, the Japanese leader’s goal was to maintain strong strategic relations with Manila, mediate between feuding allies, and ensure the Duterte administration is not moving too far into the Chinese strategic orbit.

The Abe administration seems interested in assertively countering China’s charm offensive in Manila and matching whatever economic incentives Beijing offers the Duterte administration. Abe became the first head of government to visit the Philippines during Duterte’s term, even though the Philippine president chose to make his own first state visit to Beijing rather than Tokyo. Given the importance in Asia of Japan, the world’s third largest economy and an increasingly major bilateral security partner for many Southeast Asian nations, the Abe visit also served as a major source of legitimization for Duterte, who has faced increasing international pressure over his human rights record.

As the Philippines’ biggest export destination, leading foreign investor, and largest source of overseas development assistance, Japan already has significant leverage over the Philippines. Still, Abe offered a whopping additional $8.7 billion five-year aid package, focusing on infrastructure development across the Philippines, including in Duterte’s home island of Mindanao. In a classic display of personal diplomacy, Abe also visited Duterte in Davao, where they had breakfast amid much fanfare.

Abe also became the first global leader from a rich democracy to offer support for Duterte’s controversial campaign against illegal drugs, offering assistance in terms of drug rehabilitation. But aside from charming, there was also some prodding by Abe. Though Abe formally welcomed improved relations between Manila and Beijing, he pushed the Philippines to be cautious on repairing ties with China, to maintain a strong stance on the South China Sea issue, and to uphold the rule of law (a code word for the arbitration award) on the high seas. Abe also offered more maritime security assistance to bulk up the Philippines’ surveillance and coast guard capabilities in the South China Sea.

Abe also encouraged the Duterte administration to find a common understanding with Washington, especially with the Trump administration, which has shown little interest in human rights concerns overseas, set to take over the White House. It is far from clear whether Abe has convinced Duterte to reconsider his strategic posturing, but Duterte now appears to be the beneficiary of a bidding war among regional powers.

Richard Javad Heydarian is an assistant professor in political science at De La Salle University in Manila, and, most recently, the author of Asia’s New Battlefield: The U.S., China, and the Struggle for Western Pacific.