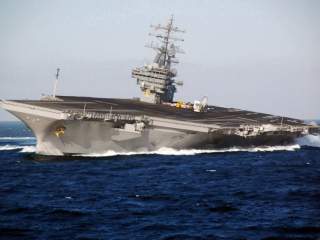 The battle tested symbol of American power seems besieged from all sides. Some say the current crop of flattops are getting overworked and simply worn out. Others say adding newer carriers comes at too high of a cost. Various other pundits feel they are just too vulnerable—thanks to Chinese, Russian and Iranian anti-ship weapons. Some say the carrier air wing of today just doesn’t have the range to fight the wars of the future. All of this is summed up by many prominent voices into a dire warning: the venerable symbol of U.S. power projection—if crucial enhancements are not made—could soon become the ‘battleships’ of yesteryear.

And while it will take time, money, technology advances and most importantly political will to solve all of these challenges, steps are being taken to ensure the carrier continues to stay relevant.

A good example is the recent test of the MK 234 Nulka countermeasure fired from the MK 53 Decoy Launching System (DLS) on December 16 aboard the USS Dwight D. Eisenhower during an exercise in the Atlantic Ocean. A short press release noted that “five successful decoy launches took place over three days” and that “two of BAE Systems Australia’s employees were also on-board to support the trial.”

The Nulka system—designed to defeat anti-ship missiles—is certainly nothing new and has been used on other U.S. naval vessels for several years. But adding it to America’s carriers who are under threat from ever sophisticated anti-ship weapons being fired from locations on land, under the waves and in the air seems a very smart and timely idea.

A short description of the system in action, provided in a news clipping about the test, demonstrates the system's value. When launched into action, the decoy emits a large, ship-like radar cross section that attempts to lure missiles away from the real target. When combined with other systems used to protect the carrier, such as missile defenses and other protective platforms, America’s carriers seem to gain what could be an important edge over the many anti-ship weapons that are now proliferating all over the world.

The system was created through a joint Australia/United States effort. Australia crafted the hovering rocket while the U.S. developed the important electronic payload. The news clip referenced above goes on to explain that the Eisenhower “is the second carrier to have the MK 53 DLS installed, but the first to successfully deploy the Nulka countermeasure while at sea.”

U.S. officials seemed upbeat about the possible enhancement to the carrier’s defensive capabilities. “The Nulka system brings with it a needed upgrade to the Ike’s current Anti-Ship Missile Defense capability,” explained Senior Chief Cryptologic Technician Christopher Noltee, the Naval Sea Systems Command Program Executive Office Information Warfare Systems 2.0 military liaison. “When a signal originates from the ship, you’re still a potential target. Nulka gives you separation. This round sends out the electronics, away from your ship. The goal is to get the missile to fly to the Nulka round instead of coming here.”

But how would this work against some of the best anti-ship weapons, like the much discussed Chinese DF-21D anti-ship ballistic missile, coming down on its target at Mach 10-12? It seems the sage council of Roger Cliff, at the time a part of the RAND Corporation, still seems relevant. When I asked him how various other types of countermeasures (such as the SM-3) would work against the DF-21D back in 2012,  he offered:

“. . . in order for China to successfully attack a U.S. navy ship with a ballistic missile, it must first detect the ship, identify it as a U.S. warship of a type that it wishes to attack (e.g., an aircraft carrier), acquire a precise enough measurement of its location that a missile can be launched at it (i.e., a one-hour old satellite photograph is probably useless, as the ship could be 25 miles away from where it was when the picture was taken), and then provide mid-course updates to the missile. Finally, the warhead must lock onto and home in on the ship.

“This complicated “kill chain” provides a number of opportunities to defeat the attack.  For example, over-the-horizon radars used to detect ships can be jammed, spoofed, or destroyed; smoke and other obscurants can be deployed when an imagery satellite, which follows a predictable orbit, is passing over a formation of ships; the mid-course updates can be jammed; and when the missile locks on to the target its seeker can be jammed or spoofed. . .

“How all this would work in reality is impossible to know in advance. Even after China has tested its missile against an actual ship, it won’t have tested it against one employing the full range of countermeasures that a U.S. ship would throw at it and, as you say, the U.S. Navy will never have tested its defenses against such an attack. Somebody is likely to be surprised and disappointed, but there is no way of knowing who.”

Considering the importance of America’s carriers—and the resources being placed into the next generation of flat tops—Washington has every reason to make sure they are not sitting ducks on the high seas. So recent efforts like adding the Nulka system into the mix along with the possible creation and deployment of a long-range remote strike platform that can penetrate and drop ordinance in tough to crack anti-access/area-denial environments all increase the carrier’s utility and decrease its vulnerability. Let’s just hope such efforts are sustained.