Is China Deploying Anti-Ship Missiles on Islands in the South China Sea? 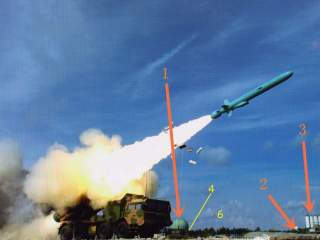 Several outlets are speculating that Beijing might have taken what is very likely the next logical step in its dangerous game of military brinksmanship in this increasingly tension-filled body of water.

The reports, coming from mostly Asian-media sources as well as speculation on the Alert 5 website, suggest that China may have deployed anti-ship missiles, specifically the YJ-62 system, on Woody Island in the Parcels Island chain.

The Alert 5 caption above pictures supposedly taken of the missiles on the islands state: “Imagery analysis of a test firing of YJ-62 subsonic anti-ship cruise missile suggests the testing took place on Woody Island in the Paracel Archipelago in South China Sea.” Photos below the missile firing show some evidence to possibly support this conclusion. So far, no major media outlets have picked up or confirmed the story--so far. The National Interest has been unable to independently confirm the report.

And how did I hear about all this? When Vietnamese media asked me to comment on it. Yikes.

The YJ-62, while certainly not China’s best missile platform, certainly packs a punch. According to the global security website:

“Each missile carries a 300 kg armor-piercing high-explosive warhead. The C602 [another designation for the YJ-62] wings can be folded back, and the location of the fixed scoop inlet is on the ventral side of the missile, mounted slightly forward of the cruciform tail fins. It uses a turbojet engine, and can reach a maximum range of 280 km and a minimum range of 40-60 kilometers. The YJ-62 has high subsonic speed, with a maximum flight speed of about Mach 0.6-0.8.”

To be clear, we won’t know for certain that such missiles have been placed in the South China Sea unless we have confirmation from Beijing, Washington or some amazing satellite photos in the next few days. But know this: China will in due time, if it has not already done so, place anti-ship missiles on its fake islands in the South China Sea--and much more. It’s only a question of when.

The reasons for such a move are quite obvious over the short, medium and long-term. First, the short term rationale (and as I explained to Vietnamese media): China could be reacting to recent moves by the United States and the Philippines. It is very possible the leaking of these photos could be a direct response to the new Enhanced Defense Cooperation Agreement. This was concluded last Friday between Washington and Manila, allowing the U.S. military to use sections of of five different military bases. These include Antonio Bautista Air Base, Basa Air Base, Fort Magsaysay, Lumbia Air Base and Mactan-Benito Ebuen Air Base. This possible missile deployment could be a reaction to this.

And for the long-term, I would argue these weapons--again, if really deployed and not some meer internet speculation—appear to be part of a long-term strategy to develop the offensive military capabilities of China in the South China Sea, enforce its claims to its so-called “nine-dash-line,” and ensure that it is the dominate power in this important body of water—all the while weakening American hegemony throughout the region. Indeed, I believe China will act much more aggressively in the months and years to come thanks to Beijing's new island bases in the South China Sea. We will likely see the basing of PLAN naval vessels in new ports China has under construction, deploying even more advanced and long-range ballistic and cruise missiles in the area beyond the possible YJ-62 deployment and even using the islands to base fishing fleets and Chinese coast guard vessels in the area--all in an effort to dominate the South China Sea militarily and enforce its sovereignty claims.

So while China may or may not have deployed such offensive missiles into “Asia’s Cauldron”—the chances are very high they will. The question is: what will Washington and its allies do when it does?

Harry Kazianis (@grecianformula) is a non-resident Senior Fellow for Defense Policy at the Center for the National Interest, a non-resident Senior Fellow at the China Policy Institute as well as a fellow for National Security affairs at the Potomac Foundation. He is the former Executive Editor of the National Interest and former Editor-In-Chief of The Diplomat. The views expressed are his own.