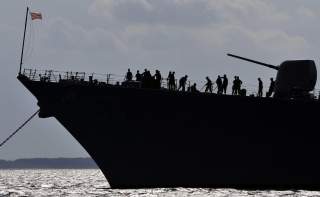 On the day President-elect Donald J. Trump first steps foot in the oval office the weight of the world’s problems will be squarely on his shoulders. The Islamic State, tensions with Russia and an out of control Syrian Civil War will loom large, ready to test the resolve of the new administration almost immediately.

Moreover, while all of the above could fully occupy the new President’s attention for years to come, a greater, multi-decade dilemma with truly global ramifications awaits—the growing challenge presented by the People’s Republic of China.

While many experts and scholars can readily recite a laundry list of reasons for growing tensions in the U.S.-Sino relationship, there is only one that counts: Beijing has determined that it no longer needs to bide its time or hide its capabilities, evidenced by China’s opposition to a U.S. led international system in the Asia-Pacific. In fact, Beijing has every intention to slowly but surely push America out of Asia and dominate what is clearly the world’s fastest growing economic region today.

And among all of the China-related problems Trump will need to deal with, growing economic competition, a rising military, increasing pressure on Japan in the East China Sea, tensions with what Beijing describes as the “renegade province” of Taiwan and so on, there is one, to be specific, a certain body of water that will test the skills of his new diplomats and strategists more than anything else: the South China Sea.

Why The South China Sea Matters:

It’s no wonder world-renowned journalist and geostrategic thinker Robert Kaplan proclaimed this treacherous sea “Asia’s Cauldron.” With over $5 trillion dollars of seaborne trade passing through ($1.2 trillion of which is U.S. goods, by the way) along with vital natural resources that power economic juggernauts like Japan, South Korea as well as China, whoever dominates the South China Sea dominates Asia. Because of this, Beijing is working hard to build what are essentially new islands in the area along with military bases and rotating in various military platforms to cement its claims and change facts on the water to ensure future dominance—all without firing a shot.

So why hasn’t the current administration worked harder to push back against Beijing in the South China Sea? While declaring a pivot to Asia back in 2011, the Obama administration’s much hoped foreign policy achievement suffered from problems nearly right from the start. Domestic challenges in the form of bruising budget battles that led to sequestration plus crisis after crisis abroad sapped the resources and political capital needed to turn the pivot into a reality.

A Plan of Action to Preserve the Status-Quo:

The incoming Trump Administration clearly has an opportunity to reset expectations and make sure China knows that it will not be able to achieve its goals in the South China Sea.

I would offer the following four key points as part of a new South China Sea strategy that could be easily implemented by the new administration with the goal of deterring China from dominating the area for the foreseeable future:

While this might seem obvious, the Obama administration’s attempts to play nice and hold their collective tongues exudes weakness. While we don’t need to declare China the “evil empire”, we do need to make sure we are honest in our assessment of what Beijing is trying to do in the South China Sea and beyond.

Whom Trump picks for various positions in his administration will signal to America’s allies and partners in Asia that we either mean business or that the Asia-Pacific will be a backwater of our foreign policy planning for years to come.

While the floated pick of Congressman Randy Forbes as Secretary of the Navy is a good first step, Trump will need to make strong picks in even bigger positions in the very near future. Selecting former Senator Jim Talent, someone who has requisite experience on China issues, would be an exceptional choice. Picking former Governor Mitt Romney would signal Trump can work with even the most bitter of rivals and that he has the temperament and judgment that world leaders will be looking for in our new Commander-In-Chief, especially in Asia.

Three: Don’t Make Promises You Cannot Keep (or Won’t) - President Obama rattled Asian leaders when he declared a “red line” in Syria over chemical weapons and broke what was an implied promise to act if crossed. And to be clear, they are not angry that Assad got away with attacking his people with chemical weapons nor are they upset that a seemingly inviolable international norm was broken. No, they were upset over the idea of what it meant for them, the fear that America would not come to their aid over bigger challenges, such as if China attacked Taiwan or if Beijing decided to land troops on disputed islands in the East China Sea. One Taiwanese diplomat last year said to me bluntly: “We don’t trust you after you broke your word in Syria.” Trump’s new Asia hands—and indeed his whole foreign policy team—must remember never to make promises you cannot keep.

Four: Be Prepared for a Long Struggle

China’s attempt to dominate the South China Sea—and eventually all of Asia—will be a multi-administration challenge. Chinese scholars, government officials, and active military personnel I have spoken to through the years have always echoed the same basic thought that America does not have the will, the patience or the strategic mindset to compete for dominance in Asia. President Xi Jinping and company feel they can wait us out, and that time is on their side. The new administration, if they are to put forward a successful strategy, must know that this will not be one or two-year challenge, but will extend through the entire Trump tenure in office, and beyond.