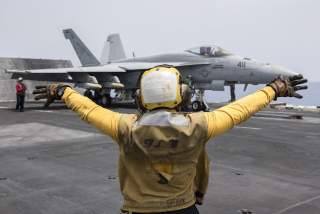 To be honest, it was quite amusing to watch the American and in many respects, international media, go into total meltdown when US President-elect Donald Trump took a simple phone call from the President of Taiwan, Tsai Ing-wen.

Appearing on the Sunday talk shows, Vice President-elect Mike Pence, using the word’s “President of Taiwan,” stating obvious reality, and creating another uproar in the process, gets to the heart of a foolish game of make-believe that the new administration could be itching to end.

Indeed, for many of us conservative leaning foreign policy professionals here in Washington who have bitterly commented on the Obama administration’s poorly resourced so-called “pivot” to the Asia-Pacific, this seemingly simple act was a clear sign of things to come — and was no surprise at all.

What President-elect Trump must do now is offer up a much more expansive vision for America in the larger Indo-Pacific region while making the case to the American people why they must support such a vision. When he does, another so-called “shocker” will reverberate the world over but will be something many China watchers have been begging for: a tougher line against Chinese aggression.

A shift in policy toward Taiwan, and indeed the whole Asia-Pacific and larger Indo-Pacific region, has been something discussed in US conservative foreign policy circles for almost a decade — even longer depending on what you base as your starting point.

The reason for such a shift is obvious. To start, Beijing flipped from foe to friend thanks to Richard Nixon — a welcomed ally against the Soviet Union. Furthermore, since the late 1970s, a largely bipartisan group of foreign policy intellectuals has pushed the idea of welcoming a peacefully rising China into the international community under the guise of what Robert Zellick famously termed becoming a “responsible stakeholder.”

The idea was to ensure China did not turn into an adversary by giving it an important place in the current international order, to prosper from it, and in many respects, help defend that prosperity for generations to come. Beijing, it was thought at the time, if given a prominent place in the status-quo, would have little reason to fight against it.

And such a policy largely worked, for a time. One can make a credible argument that Beijing did not challenge the international system, a system created largely by the United States and Western powers, for decades.

China’s economy integrated into the world financial system and Beijing became rich in the process. China now sports the second largest economy by measure of GDP (Number one if PPP is used), it has lifted hundreds of millions of its citizens out of poverty and its borders, for the most part, across all domains, are largely secure.

However, since the fall of the Soviet Union and accelerating over the last decade or so, the People’s Republic has grown weary of an international system it was not strong enough to shape at the end of World War II. Chinese leaders, quick to cite a century of humiliation at the hands of western powers along with Japan, now want to amend that system to have a greater say in Asia’s affairs, and indeed, become the dominant power, its traditional place in the Asia pecking order for centuries, before its humiliation.

As one famous Chinese academic, based in Beijing, told me recently: “You Americans actually thought we would continue to support an international system that we never had any input in creating? Especially in a time when you are in decline?”

And events in recent years only go to show the great lengths China will push to change Asia’s order to its liking. For example, Beijing’s actions over the last several years in the South China Sea — through which 80% of the natural resources it needs to power its economy passes — have sparked heated debate in America that China not only may have dangerous ambitions, but seeks to push America out of the Asia-Pacific entirely.

Such actions include: declaring a ‘nine-dash-line’ which acts like sovereign borders over the richest ocean-based trade route on the planet, building fake islands that are now being transformed into small military bases and creatively using nonmilitary maritime assets to push outlandish territorial claims all the way to far away Indonesia’s Exclusive Economic Zone.

So what will a Donald Trump policy for Asia look like? If Trump takes the advice of his most experienced Asia hands, people like Peter Navarro, Michael Pillsbury, Randy Forbes (Trump’s rumored pick to be Secretary of the Navy) and Forbes’ former deputy Alex Gray, Beijing will be in for a rough ride indeed.

As Executive Editor of The National Interest as well as Editor of The Diplomat, I have had what can be considered a front-row seat to what such thinkers have been saying for years. First, the most obvious component to such a Trump strategy, as gleaned from the various writings of this distinguished group of Asia experts, is a greater emphasis on hard power and using such power to deter aggressive Chinese actions in the future.

Specifically, higher numbers and more sophisticated pieces of US military hardware would be transferred to the region. Allowing this to happen would be an increase in US defense spending, with the end of sequestration.

Special focus would be on deploying assets that negate China’s fearsome anti-access/area-denial (A2/AD) strategy along with the much delayed public release of the Pentagon’s formal plans to push back against A2/AD, what was known in the past as Air-Sea Battle, now called JAM-GC.

Diplomacy would also be a big part of what has to be seen as a much more robust “pivot” under Trump. Taiwan would be a big part of such a strategy, with relations being upgraded just under the level of full diplomatic recognition, an important sign of growing ties, but not enough to anger Beijing where kinetic conflict could be possible. Vietnam should also see ties strengthened under the Trump administration, with possible US naval deployments to Cam Ranh Bay.

Economics, especially if the Trans-Pacific Partnership (TPP) is dead and buried, must play a big part in a newly crafted Trump Asia policy. Bilateral trade deals must be cemented with all members of the TPP, with special emphasis on Japan, Vietnam, Taiwan and Australia.

A Congressional source, who agreed to speak on background, said he already saw hints that the new administration was working up plans for bilateral trade deals throughout Asia. He explained: “The new administration realizes there is a certain cost to be paid in the Asia-Pacific now that TPP won’t happen. The goal now is to work with partners and allies in Asia to ensure trade links are expanded. There is already talk on Capitol Hill on how to move forward — and quickly after Trump takes the oath.”

But such a strategy, a plan I would fully support, will always suffer from one big challenge that must be considered if such an action were to be implemented and be successful: will the American people support it?

If President-elect Trump wants to push back on China, he must explain and sell his strategy, using important political capital along the way. He would need to demonstrate why this is a top national priority, any why ultimately Americans might be called to sacrifice their lives for it.

As one retired Chinese naval officer said to me quite recently: “Are you willing to die for your place in Asia? Are your sons and daughters willing to give their lives for Taiwan? Or rocks in the South China Sea? We are.”

There is also the issue of possibly going too far in pushing back against China — appearing too hawkish and creating tensions that could lead to conflict. If such a strategy is not managed properly, or were to become too belligerent against Beijing, and considering the fact that both nations have large arsenals of nuclear weapons, the consequences could be profound.

Ultimately, the issues raised by China’s challenging the status-quo in Asia are a timeless problem: when a rising power seeks to undo the international system and perks of an established power and its allies and partners.

However, there is much more at stake than the simple primacy of the US in Asia. If Beijing is simply allowed to tear asunder important norms like the concept of the global commons truly being borderless as well as continue to bully allies and partners throughout the region a dangerous precedent will be set that other nations will surely follow. And that is something no nation can allow to occur.