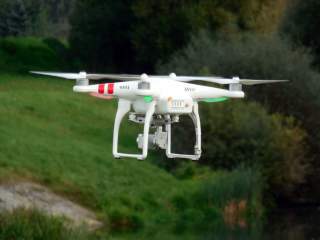 Russia is beginning to up the ante with drones, and not in the way you may think. Shortly after Syrian forces retook Palmyra aided by Russian air power, Russian television stations aired crystal clear, drone captured footage of the ruins of the Greco-Roman city. Russia has utilized these drones as an exceptional propaganda tool for its war in Syria, highlighting an often-overlooked role for drones on the information battlefields of today and tomorrow. Western media outlets and the United States would do well to consider incorporating this innovative technology into its own broader coverage of conflicts and as another tool for information operations.

Since October 2015, Russia Works, a group affiliated with the state-owned Russian television company VGTRK, has been uploading aerial footage of the conflict in Syria. Portrayed almost as a video game, the images provide a stylized look at the Russian assisted Syrian offensive. Commercially available drones with HD video cameras allow civilians to peer through the fog of war. DJI Phantoms, such as those used by Russia Works, offer unprecedented perspective on unfolding battles previously reserved for costly low-flying aircraft. The drone footage is also notable for its visceral quality. This is something more conventional footage lacks, allowing civilians to witness tanks firing in field, soldiers storming buildings, and the destruction of cities that is rapidly available online.

Moreover, these drones are relatively cheap and are rapidly proliferating among nonstate and even individual actors. Their rise draws parallels to how the spread of smartphones has transformed media. The broader use of drone videos may eventually serve a similar function to smartphone videos that have documented alleged abuses by police and have increased transparency in war. While the public has had a progressively more candid view of war since graphic photographs emerged from Vietnam, aerial-drone footage adds a degree of clarity, motion and depth to the portrayal of conflict that may dramatically alter the way wars are covered by the media.

The Russians have quickly incorporated these drones into their propaganda machine and information warfare campaigns. This footage has been used extensively by Russian broadcasters, such as Russia Today (RT) and has made regular appearances in Russian coverage of its intervention in Syria. The footage has been accompanied by coverage that characterizes Russian involvement as using clinical strikes that assist Syrian forces while minimizing civilian causalities. This coverage is part of a broader media campaign to sell the war to the Russian public. By all appearances, it looks to be successful. By early October 72 percent of Russians supported intervention, compared with 69 percent that opposed direct military assistance before Russia’s involvement and subsequent media campaign. While these figures may speak more to the peculiar nature of the Russian public, it is difficult to deny the influence of media when 90 percent of Russians receive their news through state-owned television channels.

Although drone footage, combined with traditional news coverage, provides a substantial degree of realism, it may not represent the truth. A number of private fact-checking groups, such as Bellingcat, have assessed Russian footage and found factual inaccuracies in many videos released by the Ministry of Defense.

This manipulation of information to present a particular anti-Western spin is consistent with previous Russian tactics for information warfare. These tactics have been well documented and attempt to develop provocative stories that strive to increase readership instead of presenting objective reality. Falsified information, conspiracy theories, and aggressively slanted narratives are the main fare of these information operations, conducted by such organizations such as RT and Sputnik. These stories capture the viewers’ attention and actively refute Western narratives. A prime example of this is the coverage of the downing of Malaysia Airlines Flight 17 that Russian media developed with competing narratives attributing the attacks to Ukrainian or NATO jets. The goal was, as Peter Pomerantsev wrote, “not so much to convince viewers of any one version of events, but rather to leave them confused, paranoid, and passive—living in a Kremlin-controlled virtual reality.”

Ultimately, Russian media crews possess no monopoly on these drones. Other news organizations are beginning to employ this tool and more will likely continue this trend in the future. With FAA regulations slowly evolving to accommodate drones, the U.S. media may also use drones when covering current events. The proliferation of such technology among nongovernmental groups may also provide a clearer picture of what is happening on the ground and assist states with attribution. Ukrainian volunteers and NGOs have already made significant use of drones to document Russian troops in the Luhansk and Donetsk regions. When combined with open source information, they have provided compelling visual proof of Russian presence and are helping remove some of the ambiguity surrounding Russia’s hybrid tactics. To counter Russia’s novel distortion of reality, U.S. and especially European journalists should consider incorporating this technology to create competing, fact-based narratives, while not compromising their standards and engaging in pro-European propaganda.

The United States and NATO have also begun to address Russia’s extensive use of information warfare by reconsidering old U.S. international-broadcasting programs and establishing the NATO Strategic Communications Center for Excellence in Latvia to study and advise on information campaigns. The use of drones should be considered as a component of future information operations by providing an innovative means for observing conflict. They could also potentially be part of an assurance initiative to demonstrate a strong U.S. presence in Europe. Drone footage cannot reassure Europeans worried about Russia’s ambiguous activities, but it can help ease the challenge faced by U.S. Army, Europe to make “30,000 troops look and feel like 300,000” through enhanced coverage of U.S. and NATO military exercises.

The United States must keep a careful eye on Russia as it continues to push the envelope of possibilities for unmanned aerial platforms. As shown in Ukraine and Syria, the proliferation of drones means the civilian view of bloody battlefields is about to get a whole lot clearer, if not actually closer to representing reality.