Duterte to China: ‘If You Want, Just Make Us a Province’ 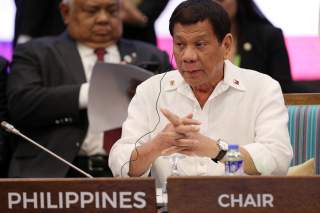 “If you want, just make us a province, like Fujian,” quipped Philippine President Rodrigo Duterte before an audience of Filipino-Chinese businessmen on February 19.

Significantly, Chinese Ambassador to the Philippines Zhao Jianhua was in attendance among influential tradesmen and industrialists who applauded the Filipino leader’s controversial statement.

Duterte was also quick to downplay in his presentation rising concerns over China’s militarization of artificially created islands in the South China Sea, including on nearby features claimed by the Philippines.

“Military bases, I must admit [it’s presence], but is it intended for us? You must be joking. It’s not intended for us,” claimed the Filipino president. “It’s really intended for those who China thinks will destroy them and that is America.”

The speech was Duterte’s latest bid to defend his pro-China foreign policy, a shift away from the Philippines’ traditional reliance on treaty ally the United States which has sent shockwaves at home and across the region as revelations of China’s expansionist designs come to light.

His statements immediately provoked a firestorm in the Philippines, with government critics claiming that the country is at risk of becoming a full-blown Chinese satellite state under Duterte’s accommodative leadership.

Public anger stirred over recent reports that China unilaterally named and registered five undersea features at the Benham Rise in the eastern Philippine Sea at the International Hydrographic Organization (IHO), an intergovernmental body that aims to ensure the world’s seas, oceans and navigable waters are properly charted and surveyed.

The Benham Rise area falls well within the Philippines’ exclusive economic zone (EEZ), but there are growing concerns that China’s naming of seabed features is a prelude to developing a military presence in the maritime area and may eventually lead Beijing into making territorial claims over the resource-rich area.

In 2017, the Philippines officially rechristened the Benham Rise as the “Philippine Rise” to reassert its claim to the seismically active undersea region. Unlike the South China Sea, the eastern Philippine Sea and Benham Rise area is not contested by rival states.

Latest satellite imagery shows that China has virtually completed building a sprawling network of military bases and facilities on contested features in the South China Sea. Those facilities are already being put to strategic use: a flotilla of Chinese naval and civilian vessels recently aggressively surrounded a Philippine Navy vessel conducting routine operations around Thitu Island.

The Philippines has exercised control over the disputed land feature, which hosts a permanent Filipino community, for the past four decades. Manila aims to upgrade Thitu’s airstrip and civilian facilities later this year. China appears to be taking issue with that claim, in a bid to squeeze other claimants out of areas it controls.

Indeed, there is a growing sense among many Filipinos that Duterte’s concessional approach has failed to curb or stall Beijing’s territorial ambitions in the area. That realization has sparked new public rallies calling on the government to take a tougher stance against China’s creeping presence in Philippine-claimed waters.

“It is absolutely unacceptable for the President, the top diplomat of the country, to joke about making the Philippines a province of China,” said Congressman Gary Alejano, a strong critic of Duterte with a military background.

The outspoken legislator was also behind the latest report suggesting China is tightening the noose around Thitu Island by restricting the Philippine Navy’s access to the land feature.

Alejano appealed to nationalism in describing Duterte’s recent speech as “irresponsible banter.” He said Duterte’s “colony” quip was tantamount to a “slap in the face of the many Filipinos, including our soldiers stationed in our occupied islands, who work tirelessly to defend our territorial integrity from China.”

Another legislator, Tom Villarin, warned that such statements, even in jest, reflect “a habit of the president to defer always to the wishes of China” and represented “willful subservience at the expense of our sovereignty.”

Ariel Casilao, another left-leaning legislator, condemned what he views as Duterte’s “defeatist stand…against the continuing aggressive behavior of China in the South China Sea.”

Cognizant of growing domestic opposition to Duterte’s China policy, the US Pentagon has doubled down on its efforts to maintain robust security cooperation with the Philippine defense establishment. Duterte has bid to loosen those ties, in part by downgrading annual joint war game exercises which previously pointed largely at China.

Washington recently deployed a carrier battle group, the USS Carl Vinson, to the Philippines for the first time since 2014. While authorities portrayed the visit as a routine expression of the two treaty allies’ bilateral alliance, the deployment’s timing was telling.

The visit came a week after the Pentagon made the unprecedented move of deploying a guided-missile destroyer Hopper within 12 nautical miles of the Scarborough Shoal.

The shoal, which lies just about 100 nautical miles from the Philippine mainland, is claimed by Manila but has been occupied by China since a naval standoff in 2012. The Philippine defense establishment fears that Beijing may soon start to reclaim land around the shoal to eventually establish military facilities on it.

Contrary to Duterte’s statements and moves, the Philippine top brass have remained receptive and supportive of America’s efforts to keep China’s maritime ambitions in check.

Washington seems determined to step up its naval presence in the area with the cooperation of its regional allies, including the Philippines, as well as new partners such as Vietnam. The carrier group is also scheduled to visit Vietnam’s central Da Nang port for the first time in recent memory.

China, however, remains undaunted. As a prominent Chinese academic recently made clear, Beijing “has the right to build whatever it needs within its [claimed] territory,” in the South China Sea. And increasingly Beijing is using US countermeasures as pretext to further expand its growing military footprint in the area.