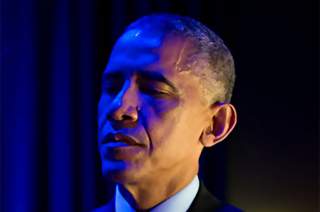 One man sets the agenda for both parties in these early days of the 2016 foreign-policy debate: Barack Obama. Neoconservative-inflected charges of appeasement and retreat by an irresponsible president will be an easy, low-risk strategy for the Republican field’s several international ingénus (think Scott Walker); more established candidates like Marco Rubio are already there. But the Republicans won’t be alone: Hillary Clinton will also contrast herself with—and perhaps launch indirect attacks against—her rival-turned-boss. That was the shape of conversation at a Friday panel on the coming election at the Center for the National Interest, the parent organization of this magazine. The panel took as a jumping-off point a pair of essays from our latest issue—one, from our editor Jacob Heilbrunn, examining the Republicans; the other, from American University School of International Service dean James M. Goldgeier, looked at the Democrats. They were joined on the panel by journalist James Kitfield and writer Michael Lind.

Heilbrunn argued that the Republican Party had experienced a foreign-policy “mind-meld.” While the old philosophical distinctions between neocons and more traditional conservatives may once have been sharp and fraught with conflict, the internal debate within the GOP has effectively ended. Heilbrunn pointed to the transformation of Kentucky senator and presidential hopeful Rand Paul, whose sharp critiques of the national-security state have largely ceased, replaced by hawkish gestures like signing incendiary Arkansas senator Tom Cotton’s controversial letter to Iranian leaders. Stridence on foreign policy has become a “very safe and convenient formula” for Republican contenders, suggested Heilbrunn, and the only remaining question is whether this approach can carry Republican candidates beyond the primaries.

Kitfield echoed Heilbrunn, noting that all the energy is with the neoconservative camp, and that “blank slate” candidates with little foreign-policy experience may find the neocons attractive on purely political grounds, as they offer a firm, clear critique of the international “retrenchment” and “hollow[ing]” of the military that have been themes of Obama’s foreign policy.

Hillary, too, will set a foreign policy shaped by the Obama era’s successes and failures. Goldgeier noted that the Democratic Party’s foreign policy has evolved significantly from the early 1990s—we are not on the verge of Bill’s third term. While Bill shaped his foreign policy around embracing globalization, spreading democracy and using force more readily, Obama’s 2008 campaign took the opposite approach on each of those issues—he criticized the North American Free Trade Area, avoided intervention, and backed off from contemporary forms of democracy promotion. Bill’s America was optimistic and lacked serious challengers, and the wave of new democracies that emerged after the collapse of the Soviet Union inspired confidence in our ability to remake foreign societies. Obama inherited a nation singed by the Iraq War, and his terms have seen both Russia and China beginning to come into their own as rivals to the United States. Yet, said Goldgeier, the realism that the Obama team embraced in these circumstances is in tension with the progressive philosophy that animates the Democratic Party. Hillary will thus be more active in international affairs than Obama, but her party is unlikely to embrace a vision as transformational as Bill’s.

Yet what George H. W. Bush called “the vision thing” remains an open question. Do any of the candidates have a plan that can adjust the sails of American diplomacy to today’s tougher circumstances, rather than muddling through? Might any focus on the great powers, rather than letting their agenda be set by the crisis du jour abroad and the ideological fervors of their partisan allies? Many on the panel were skeptical, although Heilbrunn did suggest that Jeb Bush’s approach remains the great unknown among the major candidates.