This Iranian Paper Has More Guts Than the NY Daily News 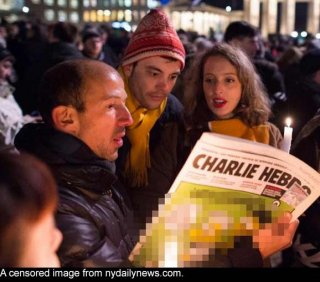 Yesterday, two editors, one in New York and one in Tehran, received photographs of people holding up covers of Charlie Hebdo, the French satirical magazine whose offices were attacked for its controversial depictions of Mohammad. The cover in the photos didn’t actually show Mohammad—they showed a rabbi pushing an imam in a wheelchair. But even that was too much for one of the editors. They opened up their photo-editing software and pixelated the cover.

So which editor was it that chose to censor a photograph? Was it the one in Iran, where dozens of journalists languish in prison, where those imprisoned journalists are often denied necessary medical care, where access to foreign media is frequently blocked and where newspapers are always in danger of being closed by the government? Or was it in New York, where journalists enjoy state-level shield laws and live in a country that rarely censors or arrests members of the press?

The censor was in the offices of the New York Daily News, which has published several blurred photographs to illustrate the story.

Shargh Daily didn’t run any of the cartoons in its print edition today, and Twitter is officially blocked in Iran (though still used), so the Iranian audience reached was probably small. Yet it was still a real risk, and one the paper knows too well. The reformist daily been closed and hauled before court several times before, including for running a cartoon the authorities didn’t like. Shargh used the image as journalists the world over should: matter-of-factly, as an illustration of one of the attack’s victims and the work that put him in the crosshairs. They didn’t hide the image, but they also didn’t use it egregiously, to shock or to offend rather than to illustrate. It was part of the story. It was good journalism.

While the New York Daily News censored the cartoons, the tabloid can hardly claim that it did so to keep deliberately shocking images out of its pages. Its cover today showed one of the terrorists standing over a wounded French policeman, rifle pointed at his head, moments before he executed the officer. The headline reads “NO MERCY”:

Many newspapers and all major U.S. television networks have declined to show Charlie Hebdo cartoons. As Buzzfeed’s Rosie Gray documented, the Associated Press even removed images from its photo service that had contained the rabbi/imam cover. Refusing to show the images is debatable. But the New York Daily News took things a big step further, actively modifying the content of the images, even as it ran a lurid, unmodified one on its front page. Perhaps they could use a dash of their Iranian colleagues’ sobriety and courage.