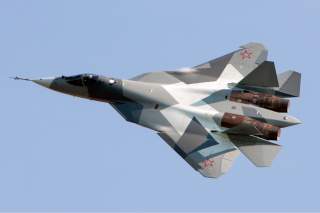 Russia expects to start testing a new engine for its stealthy Sukhoi T-50 PAK-FA fifth-generation fighter toward the end of 2017.

Currently, the Russian stealth fighter is powered by a derivative of the Saturn AL-41F1S engines that are installed on the Sukhoi Su-35S Flanker-E called the AL-41F1, which was formerly known as the izdeliye 117. Though the AL-41F1 produces roughly 33,000lbs of thrust with full afterburner, the engine is not powerful enough to realize the full potential of the PAK-FA airframe. Thus, the Russians are developing a new engine that is currently designated as the izdeliye 30 for eventual installation on the T-50.

“The engine for the PAK FA should begin flight testing onboard the aircraft in the fourth quarter of 2017 to complete the remaining work,” Alexander Artyukhov, chief executive officer for United Engine Corporation told the Moscow-based TASS news agency. “The engine will be deployed between 2018 and 2020 after it passes state tests in 2020.”

Under ordinary circumstances, an appropriate engine would have been under development for the PAK-FA before work started on the airframe design. However, the Russian defense industry was in a state of chaos in the aftermath of the collapse of the Soviet Union. As such, Moscow was not able to start developing an appropriate engine for the new aircraft ahead of time during the 1990s—which in many ways was a lost decade for the Russian defense industry.

While there are few details available about the izdeliye 30 engines, the powerplant is expected to deliver 24,054lbs dry thrust and 39,566lbs of afterburning thrust. With the new engine installed, the PAK-FA should be able to offer kinematic performance comparable to the Lockheed Martin F-22 Raptor—cruising without afterburner at speeds exceeding Mach 1.5 with a maximum speed greater than Mach 2.0 at altitudes of around 60,000ft. “Performance-wise it certainly looks to compete with the Raptor,” one senior military official with extensive experience on U.S. fifth-generation fighters told me some time ago.

But while the Russians have developed active electronically scanned array (AESA) radars, infrared sensors and excellent electronic warfare systems, one of the big questions that remain is how well the Russians have integrated the jets’ avionics. It took the United States decades of effort and billions of dollars to develop the complex integrated avionics suite and sophisticated pilot vehicle interfaces that make the Raptor the fearsome weapon that it is. And indeed, sensor integration problems and software challenges still bedevil the F-35 program even as that aircraft enters operational service with an interim configuration.

In the meantime, with the long and tedious F-35 development process nearing completion, the United States is gearing up to start development of next-generation fighters to replace the F-15C, F-22 and the F/A-18E/F Super Hornet. And the cycle starts anew.