South China Sea After the Tribunal Ruling: Where Do We Go From Here? 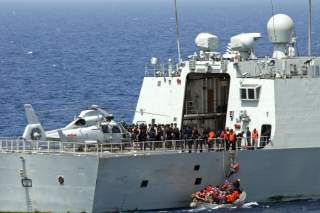 On July 12, the Permanent Court of Arbitration (PCA) at The Hague handed down perhaps the most long awaited finding in its history. After nearly four years of deliberation, the Court ruled on several South China Sea issues, based on a case filed by the Philippines against the People’s Republic of China (PRC). On issue after issue, the Court came down overwhelmingly in favor of the Philippine position.

Perhaps most centrally, the Court concluded that China’s “9-dash line,” which Beijing regularly references with regard to its claims in the South China Sea, does not grant it historic claims to the resources in those waters. The Court also ruled on the legal status of each of the terrain features in the Spratly Islands area that the Philippines had incorporated in its case. In doing so, it concluded that none of them is, in fact, an “island” in the legal sense, and none is entitled to a 200 nautical mile exclusive economic zone (EEZ). At most, the Court said, some merit a 12 nautical mile territorial sea zone.

The Court went on to determine that, as some areas of the South China Sea are within the Philippines EEZ (measured from the main Philippine archipelago), Chinese activities had violated Philippine sovereign rights. This included the construction of artificial islands (a major source of concern). In short, China’s legal standing for its actions in the South China Sea, within the context of the UN Convention on the Law of the Sea (UNCLOS), were minimal.

Even before the announcement, Chinese Foreign Ministry spokesman Lu Kang had made clear that the PRC would not accept the findings. He described the court as a “law-abusing tribunal” engaging in a “farce.” Consequently, he said, China would not recognize its ruling. A week before the ruling was issued, former State Councilor for Foreign Affairs Dai Bingguo described it as “merely a piece of paper.”

Since the ruling was issued, Chinese comments and reactions have been even less tempered. In a meeting with EU officials, Chinese leader Xi Jinping reportedly emphasized that the islands in the South China Sea have been Chinese territory since ancient times, that Beijing rejects any PCA conclusion that affects Chinese territorial sovereignty and maritime rights, and that the PRC would continue to rely on bilateral negotiation.

The Chinese Foreign Ministry spokesman Lu Kang, rebutting the American endorsement of the findings, declared the ruling “illegal and invalid.” He went on to denounce the American response as “against the spirit of the rule of law, international law, basic norms governing international relations, and its declaration of not taking sides on issues concerning territorial disputes, obstructing efforts by relevant parties to properly manage and control maritime situation and peacefully resolve the disputes.”

Last Tuesday, immediately after the PCA’s findings were announced, Cui Tiankai, China’s ambassador to the U.S., went so far as to accuse the tribunal of “professional incompetence” and “questionable integrity.” Cui also warned that the ruling “will certainly intensify conflict and even confrontation.”

Indeed, the overall Chinese response has made clear that not only does Beijing reject the findings, but that it considers the very lopsided nature of the conclusions to be evidence that the Court is biased. Certainly, Beijing does not consider the issue over and has little intention of compromising its stance that the territory encompassed within the “9-dash line” are Chinese. Indeed, Philippine fishing boats that tried to operate near Scarborough Shoal in the wake of the hearing were driven off by Chinese coast guard vessels.

In the short-run, however, it is unlikely that Beijing will engage in the outright use of force to uphold its claims in defiance of the PCA. The Chinese are currently participating in the RIMPAC exercises, which will last through August 4, and while Beijing will likely continue to harass foreign aircraft and ships in the South China Sea, a more aggressive response while it is exercising with a host of foreign navies is unlikely.

When considering likely Chinese courses of action, it is important to recognize that these are unlikely to have been formulated in the wake of the ruling. Beijing has had nearly four years to consider all the possible findings and its responses to them. This means the PRC is poised to implement responses that have been thoroughly debated and bureaucratically massaged to garner buy-in. This augurs a  wide-ranging, fairly well coordinated response.

Doubtless one element of the Chinese response will be to create a diplomatic counterweight to the PCA. This will include, on the one hand, attacks on the tribunal’s judgment and impartiality, as we have already seen. At the same time, Beijing will also try to create the impression that many other states stand with it. Prior to the announcement, Chinese Foreign Ministry spokespeople regularly declared that some 60 countries sided with China, although they did not enumerate them. Since the ruling, however, only Pakistan has joined China and Taiwan in rejecting the PCA’s findings.

Intriguingly, just before the ruling, Foreign Minister Wang Yi spoke on behalf of four states (China, Laos, Cambodia, and Brunei) in declaring a “consensus.” According to Wang, the four countries had agreed that maritime disputes should be resolved through consultations and negotiations among parties directly concerned—i.e., outside arbitration was neither necessary nor desirable. The incorporation of Brunei, one of the claimants to the South China Sea dispute, suggests that China will redouble its efforts to split the 10 members of ASEAN by exploiting cleavages among them.

The Chinese will also likely incorporate economic responses, as they have in past disagreements. China famously imposed a rare earths embargo after the Senkaku crisis of 2010. They have also required extended agricultural inspections on Filipino bananas and discouraged Chinese tourists from visiting Taiwan when there have been political frictions. At the same time, China can also encourage investment, tourism, and expanded purchases from states whose behavior they approve. The Chinese are likely to employ such tactics to remind the other claimants that their efforts will incur costs, whereas concessions can bring benefits.

Finally, as PLA Navy drills in the South China Sea just before the PCA announcement underscored, China has an array of military options available. Chinese Vice Foreign Minister Liu Zhenmin has already raised the possibility of an air defense identification zone (ADIZ). Liu declared that China has the same right to declare an ADIZ over the South China Sea as it has over the East China Sea. “If our security is being threatened, of course we have the right to demarcate a zone. This would depend on our overall assessment.” Such a move, of course, would constitute a direct challenge to the tribunal’s findings, as it would effectively assert Chinese sovereignty over the airspace and sea space of the South China Sea.

But the PRC need not declare a formal ADIZ. It can achieve many of the same results by reinforcing its presence and effectively imposing one without any announcement. If the Chinese military deployed fighters and airborne early warning (AEW) aircraft to the artificial islands, China would improve its situational awareness over the entire South China Sea and be in a position to intercept various foreign aircraft throughout the area. This would not only openly defy the tribunal’s findings, but would also make clear that China was implicitly prepared to use force to defend its claims—without the political fallout of a formal declaration.

Another option would be to deploy the new aircraft carrier Liaoning to the area. This would provide a potent reminder to neighboring states that the PLA Navy substantially outmatches any local surface force. In essence, China, long the subject of gunboat diplomacy, could now wield that tool itself.

At least two factors that could affect Beijing’s responses remain unclear. The first is the Philippine reaction. The election of Rodrigo "Rody" Duterte as Philippine president has made future Philippine policy toward China and the United States uncertain. Duterte’s campaign platform built on the idea that he wanted to revisit Philippine defense spending and the Enhanced Defense Cooperation Agreements (EDCA) that had been reached between the US and the Philippines, and that he wanted to improve relations with Beijing.

One of President Duterte’s first actions in the wake of the PCA decision was to ask former President Fidel Ramos to visit Beijing to initiate talks. While the establishment of high level communications between Manila and Beijing is important, it remains to be seen what the nature of such discussions will entail. If President Duterte chooses to make concessions to Beijing, in light of the tribunal’s findings, this would lower tensions, but also raise real questions about the prospect of US-Philippine cooperation.