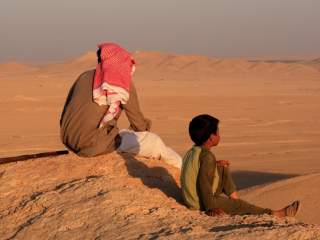 The geography of Syria complicates efforts to end the nearly five-year-old war in the country.

With deserts in the south and the great plains of the fertile crescent in the east, there are only two main stretches of strategic importance in Syria—the coastal plains and mountains of the west, controlled by the regime of president Bashar al-Assad and its allies, and the Euphrates river region in the east under Islamic State’s dominion.

The two regions meet in the north around Aleppo, the front line of the civil war. Western-backed Sunni Arab rebels control Aleppo and its surroundings.

Cutting through what would otherwise be the desert of Syria, Islamic State’s territory in Syria is located mostly along the Euphrates. Moving north from Iraq’s Anbar province, the group followed the river into Syria, capturing the crossing at Abu Kamal on June 30, 2015 then moving north toward the Turkish border. With the border behind it and desert to the west, Islamic State was able to control the river with relative ease.

Only in the town of Deir Ezzor, the largest city in the east and the center of Syria’s petroleum extraction, has Islamic State faced a direct, sustained challenge.

Due to its economic importance, the city has enjoyed a heavy regime military presence since before the civil war. Air strikes have targeted bridges and infrastructure, straining the militant group’s supply lines and bolstering Assad’s forces. The regime must resupply its troops from the air, however. Shortages have hamstrung the government troops and allowed Islamic State to gain control of most of the city with the exception of some military installations.

Islamic State has largely failed to move beyond the river with the exception of Palmyra, a city of immense historical importance in the middle of the country, surrounded by mountains and desert. The militants’ attempts to control Kobani failed, with Kurdish fighters and U.S. air strikes pushing them back, and their effort to push into Aleppo met with resistance from both the Sunni Arabs and the Assad regime.

It’s unlikely that the Sunni Arab forces in the area can push Islamic State back down the river, however. The Syrian army and its allies loom on the Sunnis’ western flank, limiting their choices.

On the coast, Assad’s army maintains a comfortable position. The region is a traditional regime stronghold and with Hezbollah maintaining control of most of the region surrounding the Lebanese border, the government enjoys a desert barrier on one side and a coast on the other. Sea supply lines to this heartland are easy to maintain, and the regime’s air power can easily detect and repel attacks.

Russia has concentrated its efforts in the northern region. This has led critics to claim Russia is using the war on terror as a cover to target Western-backed rebels who pose a threat to Assad. Moscow’s air strikes aim to clear the region of rebels and allow regime ground forces to move on Idlib and Aleppo.

This strategy has met resistance. Turkey has already shot down one Russian airplane, claiming the plane violated its airspace.

The geographic realities of the conflict in Syria determine options for ending the conflict. The 70,000 Sunni Arab rebels, among the most potent force for defeating the Islamists, are prisoners of geography. Their location on the border of a friendly Turkey means supplies and fighters can continue to flow, but with Assad to the west and south and Islamic State to the east, they’re trapped.

The fighters are too fractured to make military decision as a group. Even if this were possible, any decision would come at the cost of potential existential risks. Air strikes to the east may be enough to release the pressure from Islamic State, but unless the western border is safe—a guarantee Assad is unlikely to give and which the people would be unlikely to trust—any offensive against Islamic State comes at too great a risk to those arguably most capable of defeating the group.

Thomas Baron writes for War is Boring, where this article first appeared.