The Kremlin’s Take On Syria and Global Terror 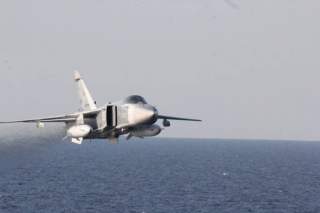 This year’s focus was international terrorism.

The presenters also offered insights into Russia’s military operations in Syria and expectations for future relations with the United States.

The intervention led by the Russian Aerospace Forces, which began at the end of September, has been surprisingly successful—a textbook example of the application of limited military power for attainable goals.

With few Russian casualties, the Russian forces saved the Assad government from likely defeat last year and have made Moscow an indispensable player in the Syrian peace process.

Syrian Foreign Minister Sergey Lavrov boasted that, “Coordinated with the government forces and later with the patriotic opposition squads, the Aerospace Forces’ operations made it possible to push back the terrorists and lay the groundwork for ceasefire agreements, delivery of humanitarian aid to those who need it, and the start of political settlement in Syria.”

He called the cooperation between Russia, the United States, and other countries on this issue as “an advance towards implementing Russian President Vladimir Putin’s initiative to create a broad-based antiterrorist front, which he addressed to the UN General Assembly.”

In his report to the conference, Defense Minister Sergei Shoigu said that, with Russian military assistance, Syrian government forces had recovered more than 10,000 square kilometers as well as 500 populated areas from Daesh, Jabhat al-Nusra (an al-Qaeda affiliate), and other terrorist groups.

He added that, following the withdrawal of the main Russian units from Syria, the remaining force was seeking to destroy the militants’ military infrastructure (including arms depots and training camps) and financial assets (denying them means to purchase weapons or pay their fighters). Shoigu asserted that other Russian objectives in Syria were now securing a political settlement and providing humanitarian relief, which he said amounted to more than 700 tons of medical, food, and other aid over the past few months.

Lieutenant General Sergey Rudskoy, the chief of the Main Operative Department of the Russian General Staff, reproted that the Syrian and Russian forces had already destroyed some 200 oil extraction facilities under the opposition’s control, as well as more than 2,000 means for delivering oil products.

He stated that Russian and Syrian actions had also disrupted all shipments of oil and gas from Syria to Turkey, which Russian analysts see as a major source of terrorist financing, armaments, and other support.

Rudskoy said that the Russian armed forces were using some 70 UAVs as well as orbiting satellites and other technical means to monitor developments on the ground.

In his presentation, the Chief of the Russian General Staff, Valery Gerasimov, attributed part of Moscow’s success in Syria to the experience Russian forces had gained fighting in insurgents in the North Caucasus, which “gave Russia an opportunity to develop the solid foundation for the legal framework and combat practices.”

It would be interesting to study this issue further—what lessons did the Russian military learn from Chechnya and apply in Syria.

Other Russian speakers emphasized the imperative of addressing the broader global terrorist threat.

Chief of the Military Academy of the General Staff of the Russian Armed Forces Colonel General Sergei Makarov noted that it was necessary to cooperate in fighting against terrorism, drug trafficking and cybercrime. Credit: Russian Foreign Ministry.

He also assessed that they had obtained substantial heavy weaponry, including tanks, armored personnel carriers, and anti-tank and anti-aircraft systems.

Furthermore, Afanasyev warned that Daesh was in the process of destabilizing Libya, building on their stronghold the Mediterranean port of Sirte, recruiting thousands of fighters from Egypt, Libya, and Tunisia.

Moreover, he claimed that hundreds of Islamist militants were also entering Europe each year from these combat zones, “ready to use the experience they have gained” in new acts of terrorism.

Finally, he saw the rise of a “Terrorist Internationale” in Africa, led by Boko Haram with thousands of members, in destructive competition with the al-Qaeda affiliated groups of the continent, that risks destabilizing the whole of Africa.

Many of the Middle Eastern speakers at the Conference praised Russia’s positive contributions to fighting terrorism. Russian government propaganda about Western democracy promotion exacerbating regional instability and Western indecisiveness in the face of Islamist terrorism appealed to some in the region.

In his conference presentation, Iranian Defense Minister Brigadier General Hossein Dehqan criticized the United States and its local allies for pursuing a double-standard approach in the region and supporting proxy terrorist forces.

In his words, “the world is exposed to insecurity, instability and escalation of fear of terrorist activities of Takfiri-Zionist trends which are supported by the US, the Zionist regime and some regional countries headed by the Saudi government.”

In the side conversations at the conference and in other discussions in Moscow, it became evident that Russian national security experts are torn between wanting to exploit the last year of what they see as a weak Obama presidency, or waiting until 2017 in the hope that an even more favorable Republican administration might gain power, with the risk that a more vigorously hostile Clinton administration might emerge.

Russian leaders are calculating the prospects of a possible Trump presidency to decide whether to forego gains this year in the hopes of achieving what they would perceive as better results next year.

The Russians perceive that Trump would follow a general policy of isolation, which would weaken NATO, and that Trump seems open to dealing with Putin on outstanding issues—Russia could have Syria, the U.S. would have Turkey, Russia gets Crimea, and so on—and Russians see his worldview as similar to that of Putin—disdainful of democracy, anti-Muslim, tough on terrorism, and so forth.

Of course, Obama’s own reset strategy failed in the face of the enduring obstacles to Russian-U.S. partnership, but asymmetrical cooperation might prove possible if Washington and Moscow prioritize different areas of the world.