The Pompeo Plan: Present Iran With Hurdles It Won't Jump 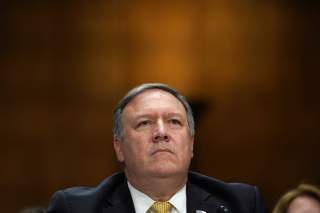 Washington’s fixation on Iran, exhibited by Secretary of State Mike Pompeo’s Monday speech, has prevented U.S. policymakers from developing a less toxic relationship with Tehran. The current Iranian regime will never be a friend of America, but neither nation benefits from a state of permanent hostility. And contrary to administration claims, Tehran poses little threat to the United States.

Despite Washington’s perverse fear-mongering regarding Iran, the latter is militarily weak, economically decrepit, and politically divided. Washington’s globe-spanning armed forces spend almost forty-three times as much as does Iran’s military. Saudi Arabia alone devotes nearly five times as much on defense. Although Saudi Crown Prince Mohammed bin Salman compared Iran’s supreme leader to Adolf Hitler, MbS, as he is called, admitted that: “Iran is not a rival to Saudi Arabia. Its army is not among the top five armies in the Muslim world. The Saudi economy is larger than the Iranian economy. Iran is far from being equal to Saudi Arabia.”

The vision of vast new Persian empire in the making is among the worst fantasies propagated by Washington and its Mideast allies. As MbS observed, Iran is a minor-league power. It gains influence only through the weakness of those around it, which is why Riyadh fears Tehran. Even Iran’s antiquated theology looks good compared to a system of absolute monarchy most noted for its licentiousness and corruption.

Elsewhere Tehran has made gains where most countries would prefer not to make gains: with the ravaged nation of Syria, which remains at war and faces years of reconstruction; the perpetually divided nation of Lebanon, which fears return to sectarian conflict; the devastated nation of Yemen, which, like Humpty Dumpty, has fragmented, perhaps beyond repair; and Iraq, courtesy an American invasion, which replaced a secular dictatorship with Shia authoritarians. What fearful threat to America or anyone else could Tehran mount with this tragic assemblage?

The current Iranian government is awful, though not as repressive as nearby American allies Saudi Arabia and Bahrain. Iran should be confronted, but in ways to encourage its own transformation. Multiethnic, home to religious minorities, and filled with youthful liberals inclined toward the West, a battle for Iran’s soul—rather than campaign to destroy its economy—offers the best hope for the future. Yet in his address at the Heritage Foundation Pompeo defended dumping the JCPOA, which launched precisely that fight, in favor of an economic offensive intended to force Tehran’s surrender.

The administration’s objective, it seems, remains the same as in 1953, which is when Washington backed a coup that led to nationalist dictatorship and then an Islamist revolution. Since then the United States has often been the aggressor, backing Saddam Hussein’s invasion of Iran, shooting down an Iranian airliner, seeking to overthrow Iran’s Syrian ally, threatening Tehran with war, and arming aggressive, totalitarian Saudi Arabia. Overall, America has had a much more destabilizing impact on the Middle East than has Tehran. The fact that Washington’s policies might have something to do with the character of the Iranian regime and its activities in the region naturally did not make it into Pompeo’s speech.

Although formally indicating a readiness to negotiate, Pompeo presented an offer that Tehran cannot accept: surrender your sovereignty and defense and the United States will end sanctions. He made twelve demands—God only made ten to the ancient Israelites—without offering anything additional in return, even where the United States or its allies are at fault.

Pompeo’s first three items are related to nuclear issues. After rejecting an agreement with the toughest oversight yet, he demanded, without compensation, even tighter restrictions, including a bar on reprocessing and closure of Iran’s heavy water reactor. Destroying the JCPOA, which could have been the foundation for additional negotiation, and demonstrating that the United States is unreliable—unwilling to keep its commitments and ready to make additional demands—is not likely to spawn a new round of diplomacy.

The fourth point is that Iran halt missile proliferation and development of nuclear-capable missiles. Missiles are the regime’s primary deterrent, given the overwhelming conventional forces of those surrounding it, and “nuclear-capable missiles” can have conventional uses. Is the United States prepared to stop arming Iran’s enemies, most notably Saudi Arabia and the United Arab Emirates, which continue to purchase expensive new warplanes and other weapons?

Next, Pompeo demanded the release of Americans “as well as citizens of our partners and allies” detained on “spurious charges.” No doubt U.S. citizens have been detained as political pawns and should be freed, though behavior innocent in Americans’ eyes might not be viewed the same way by a hostile, paranoid regime. Indeed, Iran would say that none of its prisoners are held on “spurious charges.” So, Pompeo means Iran must release everyone, irrespective of its claims and law.

Sixth, Tehran must stop backing “terrorist groups,” including Hezbollah and Hamas. Actually, neither is a terrorist group as normally understood. Moreover, neither  Hezbollah nor Hamas threatens the United States. Both are quasi-governments engaged in a sometimes hot war with Israel, which puts them on the administration’s hit list. Maybe Tehran would stop aiding them if the United States and its allies agreed to stop targeting the former.

Pompeo also ordered Iran to “respect the sovereignty of the Iraqi government and permit the disarming, demobilization and reintegration of Shia militias.” If there was an award for chutzpah it would go to Pompeo for this requirement. Which country invaded Iraq? Ousted its government? Placed in power a sectarian Shia government friendly to Iran? Loosed the Sunni insurgent and terrorist forces which morphed into ISIS, whose victory required intervention by Iranian militias?

Iran’s role in Iran is controversial, but the Iraqi people are divided on the issue. In the latest election the leading bloc criticized both American and Iranian involvement in Iraq. Coming in second was a Shia coalition allied with the very militias attacked by Pompeo. Third was the prime minister’s faction, which used these militias to defeat ISIS. Fourth was the former premier whose sectarian Shia government was close to Tehran. What evidence is there that the Iraqi people want Pompeo’s “help” in this regard?

The eighth point is that “Iran must also end its military support for the Houthi militia and work towards a peaceful political settlement in Yemen.” This one belongs as a gag at the White House Correspondents’ Dinner. Yemen has been constantly divided and embattled; Saudi Arabia has intervened more extensively than Iran, years ago even introducing troops to aid Yemenis royalists. Tehran had little to do with the Houthis present revolt, then joined by former president Ali Abdullah Saleh, and counseled the new coalition against its aggressive moves.

Saudi Arabia attacked Yemen to reinstate a pliable government and is responsible for most of the infrastructure damage and civilian casualties. Riyadh’s intervention left the Houthis little alternative but to seek aid from Iran, which at little cost has been able to bleed the ineffective Saudi military. The easiest way to reach a peaceful solution would be for the United States to stop underwriting Riyadh’s war with munitions, aerial refueling, and targeting assistance.

Ninth, Pompeo wants Iran to withdraw its forces from Syria. Will the United States do the same? Tehran was invited in by the Syrian government, a long-time ally. Syria also is far closer to Iran, which has obvious security interests there, in contrast to America, which has none. Washington sought to overthrow the established government, empower radical Islamic forces, and even now illegally occupies a quarter or more of the country. Iran can far more credibly insist that the United States bring its forces home.

Number ten, Iran is to end its support for the Taliban and “other terrorists in Afghanistan,” and stop harboring of Al Qaeda leaders. Well, yes, that would be in America’s interest, and after 9/11 Tehran was on America’s side against the Taliban. In 2003 Tehran offered to negotiate most issues of interest, but the Bush administration wasn’t interested. Iran obviously came to believe that the enemy of my enemy is my friend, and Washington’s catastrophic failure in Iraq gave Iran an opportunity to oppose America elsewhere. As for Al Qaeda, the United States backed the local affiliate in Syria. It seems the Obama administration cared less about destroying an organizational heir to those who attacked America than in promoting regime change in Damascus.

The eleventh demand is for the IRG Quds Force to stop its support for “terrorists and militant partners around the world.” That would be good, but the United States also backs somewhat dubious allies all over the earth. Some of those insurgents and governments have been repressive, brutal, militaristic, and even terroristic. Perhaps Washington should offer to stop backing such groups and regimes in return.

Finally, Pompeo said “Iran must end its threatening behavior against its neighbors—many of whom are U.S. allies. This certainly includes its threats to destroy Israel, and its firing of missiles into Saudi Arabia and the United Arab Emirates. It also includes threats to international shipping and destructive cyberattacks.”

Of course, America’s allies return the threats—and some are dangerously aggressive against Iran’s friends. The Gulf States and America sought to overthrow Iranian ally Syria. The Gulf States backed by the United States invaded Yemen, seeking to oust a faction with loose connections to Iran. Saudi Arabia used its military to buttress the dictatorial Sunni monarchy in Bahrain, which launched a brutal campaign against the democracy movement representing the majority Shia population. Israel threatens Iran and assaults Tehran’s forces engaged in the Syrian civil war.