Is the Russian Military Going Robot? 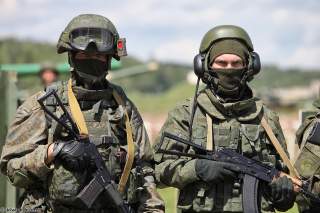 "This vehicle has good prospects both in the military and in the civilian markets,” Anatoly Serdyuko, Rostec’s industrial director told TASS. “Its scope of application is very wide, such a drone can carry powerful monitoring systems on board, serious weapons that the quadcopters, which are widespread today, can not carry into the air."

Once it enters mass production, the aircraft could prove to be useful to the Russian military. “This unmanned helicopter will enhance the military capabilities of the nation's armed forces, as well as serve as a useful addition to the civilian sector such as emergency and first responders,” Sam Bendett, a researcher at the Center for Naval Analyses told The National Interest.

This particular aircraft—the designation of which is unclear—is one of several designs that are currently being tested in Russia. “Russia has been testing small unmanned helicopters, and already has several models in service,” Bendett said. “This particular prototype can carry more cargo at greater distances and for longer periods of time.”

The Russians are investing extensively in a host of unmanned systems so that those machines can takeover the most tedious and dangerous jobs that are currently performed by humans.

While the Russians have been lagging behind the West in drone technology, Moscow is working hard to close the gap. “They are certainly making great efforts at designing and fielding systems that are like the ones serving in the West, so the gap is starting to close,” Bendett said.

At the end of the day, the United States and other Western nations still maintain a lead over Russia in drone technology. However, the Russians are determined to catch up. Given the Kremlin’s considerable investment in unmanned technology, the Russians will probably close the gap to some extent. But drone technology is rapidly proliferating around the world and more competitors will almost certainly pop up.