The U.S. Navy Is Desperate for More Nuclear Submarines (But Will It Build Them?) 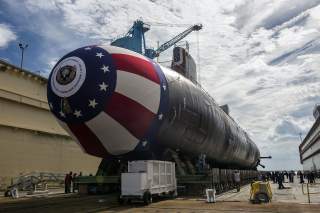 If the United States Congress allocates the money to increase the production rate for the Virginia-class nuclear-powered attack submarine (SSN), General Dynamics Electric Boat has the industrial capacity to build those additional vessels.

“If the money is there to support it, absolutely,” Jason W. Aiken, chief financial officer and senior vice president of General Dynamics Corporation told investors during an earnings call on October 25.

“I would tell you that we have the capacity to move the rate up, so we're at a steady two per year now in the foreseeable future.”

The Navy is currently trying to decide if it can build another Virginia-class submarine in the years where it is building a new Columbia-class ballistic missile submarine.

“There is conversation around what to do in years when a Columbia submarine is delivered, and so we'll have to see if there's opportunity from a budget standpoint to add Virginia-class there,” Aiken said.

“But bottom line, we stand ready to do that. We have the capacity to do it and it frankly comes at a relatively minimal investment.”

The bigger question for the shipyard is now to prepare for the construction of the new Block V Virginia-class boats, which incorporate a new hull section with four additional payload tubes that each carry seven cruise missiles for a total of 28 (for a total ship capacity of 40 missiles).

“The investments at this point moving forward that we're evaluating for Electric Boat really have to do with the Block V module – for the Virginia Payload Module on the next Virginia-class contract – and, of course, the Columbia investments, all of which we're in the process of discussing with the Navy,” Aiken said.

The U.S. Navy has awarded Electric Boat a $5.1 Billion contract to undertake the detailed design work for the new Columbia-class SSBNs. The new SSBNs are expected to start construction in 2020. The Navy plans to buy twelve of the massive new submarines for the critical strategic nuclear deterrence role.

"Working closely with the Navy and the submarine industrial base, Electric Boat will continue to lead critical aspects of the Columbia-class development effort, including design, material procurement, construction and operating-cost reduction, to achieve an affordable and effective program," Electric Boat president Jeffrey S. Geiger said in the statement earlier last month.

The U.S. Navy is currently experiencing a serious shortfall in the number of SSNs in the fleet. If nothing is done, the U.S. Navy will only have 41 SSNs in its fleet by 2029, down from roughly 52 today against a revised requirement for 66 attack submarines. The only way to make up the shortfall, which might take decades to rectify, is to build more submarines.