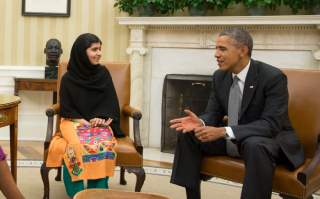 The Norwegian Nobel Committee has abandoned its recent fondness for giving the Peace Prize to aseptic international bureaucracies, giving this year’s award to Malala Yousafzai, a human, and Kailash Satyarthi, another human. That’s a positive step, and the two clearly deserve recognition. The sort of work they do—advocating on behalf of children—also merits international notice, as many states around the world are experiencing massive “youth bulges.” This global bumper crop of young people will shape this century for good or for ill, and people like Yousafzai and Satyarthi are fighting on the side of good. The two are also from opposite sides of one of the world’s many bloody frontiers—Satyarthi is a Hindu from India, Yousafzai a Muslim from Pakistan. They’ve invited their leaders to join them at the award ceremony in December, prompting jokes that they’re already working on their next Peace Prize.

Both had already won a raft of international honors. Their cause and their heroism is almost universally acclaimed in fashionable circles. There won’t be a Nobel controversy this year.

And it’s a shame there wasn’t.

2014 has been a terrible year. A new European war opened up in Ukraine. Israel and Hamas were at each other’s throats again. The Syrian civil war, which didn’t seem like it could possibly get any worse, did, with a new barbarism emerging and spreading into Iraq. International tension is on the rise in East Asia and between the great powers. Afghanistan, Pakistan, Somalia, Yemen, Mexico, Nigeria, Libya, the Central African Republic and others became or remained bloody messes. That the people “who shall have done the most or the best work for fraternity between nations” (as Alfred Nobel’s will put it) in such a year would be a pair of children’s-rights advocates shows us just how far we are from peace.

Today’s international system is in serious disorder. We do not need prophets to scourge us or minor saints to rescue a few of us from the rising tide of blood. We need statesmen who are not afraid to wade into it, to be stained by it, but finally to stop it. War ends when the war-makers choose peace. And peace lasts when the war-makers shape it to reflect their interests and their mutual fears, so that the next generation of potential war-makers will be satisfied, too. Peace can be an ugly business. The pure in heart often play only minor parts.

That is reflected in the history of the Nobel. Some of the greatest steps for peace were taken by people your postcolonial studies prof would have called “problematic.” Anwar Sadat, anti-Semite, Nazi fanboy and author of a war of aggression against a neighboring state, won his alongside Menachem Begin, a retired terrorist who was no stranger to acts of aggression himself. The peace they made dramatically reduced the chances of another massive Arab-Israeli war—a war which, if the previous one is a guide, would introduce real dangers of nuclear attack and even great-power conflict. The humanitarian benefits of that peace were enormous, and continue to accrue to this day. The story’s similar elsewhere. We find a number of warring parties. We find the great imperialist Teddy Roosevelt, who helped settle the Russo-Japanese War. We find apartheid leader F. W. de Klerk and Nelson Mandela, who long refused to give up armed struggle. Taken together, the grubbier winners of the Nobel could rightly claim that they saved the lives of hundreds of thousands—if not of millions.

So we should hope that this time next year, the salons are howling with outrage at the news of the Norwegians’ choice. We should hope, indeed, that the Norwegians found themselves with many equally ugly alternatives. That would be a sign that the world was back on the way to stability, that the bloodshed had slowed. And if they must once again give the Peace Prize to someone we could all agree on? I hope we’ll still be here to politely applaud.